There is one European economic policy/theory fetishism that stresses the importance of external balance in 'underpinning sustainable' growth. The theory works the following way: countries with external imbalances (e.g. current account deficits) need to enact 'reforms' that would put their economies onto a path of external surpluses. More commonly, this is known as achieving an 'exports-led recovery'.

Look at the actual historical relationship between current account position and growth in income per capita, measured in real (inflation-adjusted terms).

Take the sample of all advanced economies (34 in total, excluding those that we do not have full data for: San Marino and Malta). Take total growth achieved in GDP per capita from the end of 1999 through 2014. And set this against the average current account surplus/deficit achieved over the same period of time. 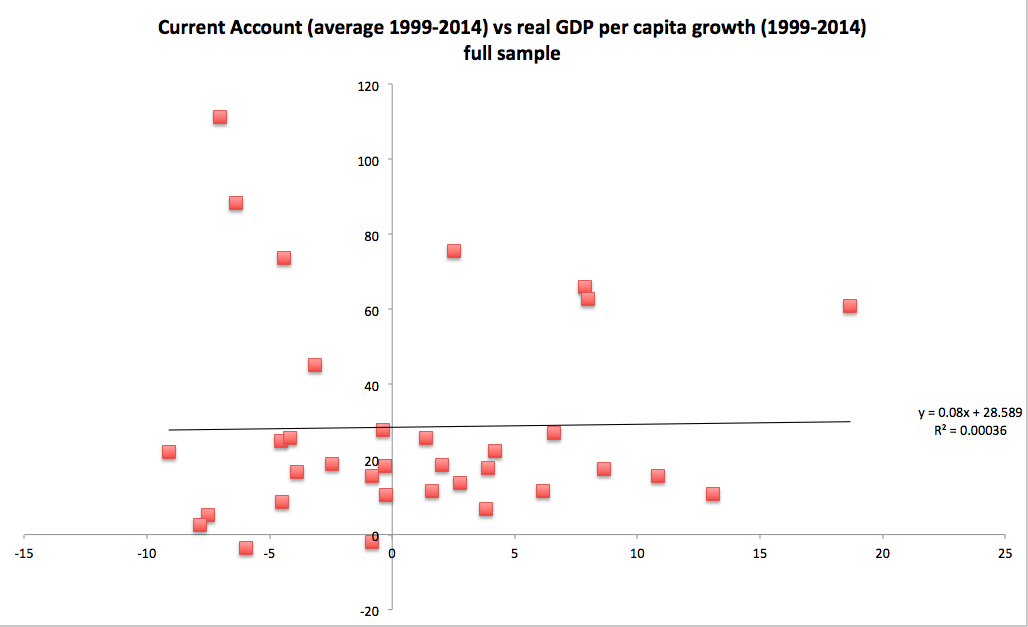 Note: there is no point, given the sample size, to deal with non-linear relationship here.

Per chart above, there is, statistically-speaking no relationship between two metrics. Multi-annual growth GDP per capita (in real terms) has basically zero (+0.019) correlation with multi-annual average current account balance. The coefficient of determination is a miserly 0.00036. 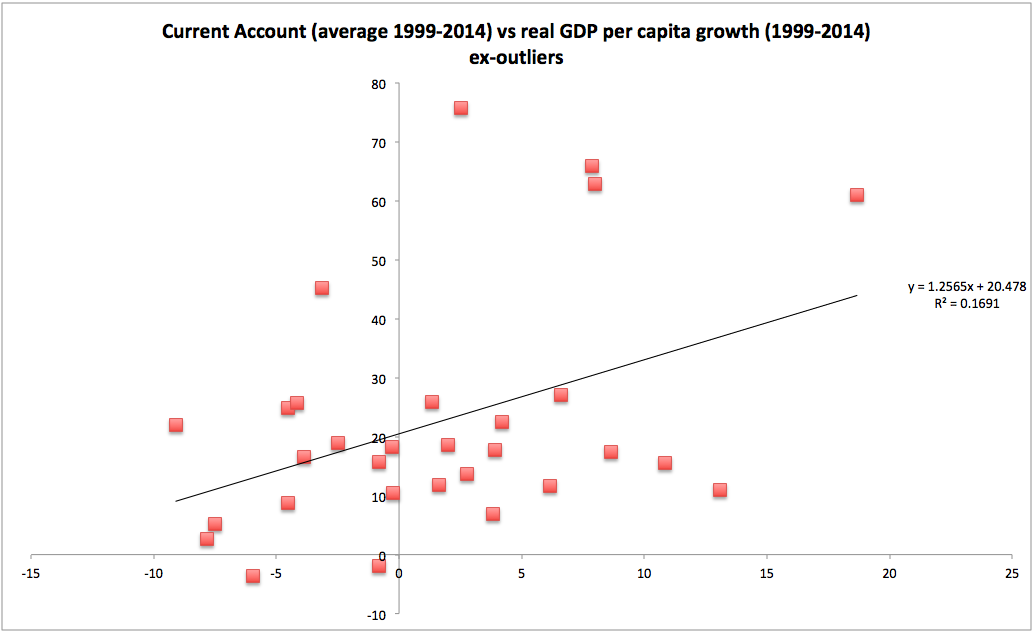 Per chart above, there is a very tenuous relationship between multi-annual growth GDP per capita (in real terms) and multi-annual average current account balance, highlighted by a rather weak, but positive correlation of +0.41 between two metrics. The coefficient of determination is around 0.17, which is relatively low for the longer-term averages relationship across the periods that capture both - a slowdown in growth in the 2002, a boom-time performance for both the advanced economies and the global economy during the 2000s and the global crises since 2008.

I tested the same relationship for GDP per capita adjusted for Purchasing Power Parity and the results were exactly identical. Furthermore, removing the three Asia-Pacific growth centres: Taiwan, Korea and Singapore from the sample leads to a complete breakdown of the stronger relationship attained by excluding the Eastern European outliers, with coefficient of determination falling to ca 0.05. Removing these three economies from the sample with Eastern European outliers present results in a negative (but statistically insignificant) relationship between the current account dynamics and growth.

Lastly, it is worth noting that the sample is most likely biased due to policy direction: during economic slowdowns and in poorer performing European economies in general, there is a strong policy bias to actively pursue exports-led growth strategies, while in non-euro area economies this is further reinforced by the pressure to devalue domestic currencies. Which, of course, suggests that the above correlation links are over-stating the true extent of the current account links to growth.

The conclusion from this exercise is simple: there is only a weak evidence to support the idea that for highly advanced economies, rebalancing their economic growth over the longer term toward persistent current account surpluses is associated with sustainable economic growth. And if we are to consider a simple fact that many euro area 'peripheral' economies (e.g. Greece, Cyprus, Portugal and Spain, as well as Slovenia) require higher upfront investments in physical and human capital to deliver future growth, the proposition of desirability of an 'exports-led' recovery model comes into serious questioning.
Posted by TrueEconomics at 9:04 AM