January IMF review of the economic situation in Ireland rained a heavy dose of icy water over the already overheating Government spin machine, and much of the IMF concerns centre around exactly the same themes that were highlighted in these very pages last month. 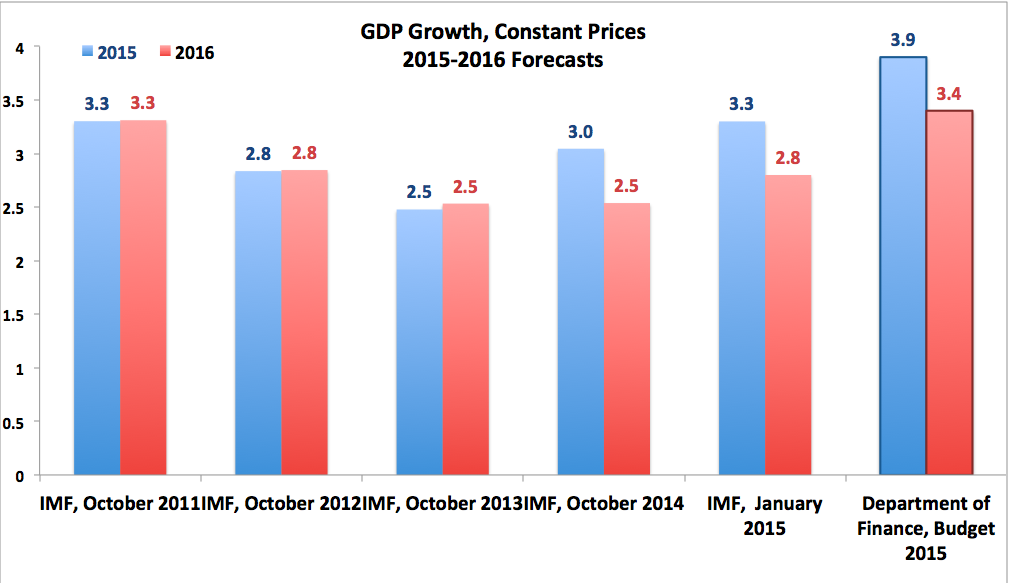 Source: IMF and Department of Finance

The drivers behind IMF’s skeptical view of our prospects are exactly in line with those discussed in this column before. Exports growth is likely to be much shallower than the Government anticipates, while the domestic demand is still subject to massive debt overhang carried by households and companies.

As an aside, the IMF assessment of the Budget 2015 measures is far from confirming the mainstream Irish media and Irish Left’s view. The IMF had this to say about the measures: “Income tax cuts that increase the already strong progressivity of the system are the main items. While not significant to the revenue intake, reductions in property taxes by 14 local authorities, including Dublin, are a setback for collections from this recent broadening of the tax base.” Doing away with the tax breaks is fine, if it is done in the environment of falling distortionary taxes. Still, coupled with elimination of the property capital gains relief, the entire Budget 2015 was hardly a transfer from the poor to the rich, but rather a net tax increase on the upper earners, especially the self-employed professionals, relative to lower waged.

But back to the impact of growth risks on our Government’s balance sheet. Consider the IMF estimates for public debt dynamics.

Firstly, note that public debt fell from 123 percent of GDP in 2013 to 111 percent of GDP at the end of 2014. Impressive as this change might be, it is driven by one-off changes and not by any significant debt drawdowns. Consolidation of the IBRC into General Government accounts and its subsequent liquidation first pushed Irish Government debt up by 6.2 percent of GDP (EUR12.6 billion) in 2013 and then cancelled most of the same in 2014. All in, IBRC liquidation shaved off 6 percentage points off our 2014 debt to GDP ratio. In between, change in the EU accounting rules raised our 2013 GDP by 6.5 percent. Stronger economic conditions and smooth exit from the Troika Programme have meant that the Irish Government was free to spend some of the borrowed cash reserves on buying out IBRC-linked bonds held in the Central Bank. This drawdown of previously borrowed cash contributed to some 4 percentage points drop in Irish debt to GDP ratio. For all the Government’s bravado, last year’s economic recovery contributed only 1.75 percentage points to the debt decline or roughly one sixth of the overall improvement.

Still, barring adverse shocks, we remain, for now, on course to drive debt to GDP ratio below 100 percent of GDP before the end of 2019.

As IMF notes, however, a temporary drop of 2 percentage points in 2015-2016 forecast nominal GDP growth rates would push our debt to GDP ratio to 117 percent in 2016. And on the balance side, a one percent rise in primary spending by the Government can push public deficit to 3.6 percent of GDP in 2015 and 3.0 percent in 2016 instead of Government projected 2.7 percent and 1.8 percent, respectively.

The IMF is concerned that the Irish Government is suffering from the ‘adjustment fatigue’, especially once the upcoming political pressures of the general election start looming on the horizon. The danger is that “…medium-term fiscal consolidation is at risk from spending pressures, requiring the adoption of a clear strategy to enable the restraint envisaged to be realized. … As the public investment budget is already low, current expenditures will have to bear the brunt of spending restraint, while ensuring the capacity to meet demands for health and education services from rising child and elderly populations. Nominal public sector wages and social benefits must be held flat for as long as feasible and the authorities will need to continue to seek savings across the budget.”

Somewhat predictably, the Irish authorities offered no strategy for fiscal management beyond 2015 and no expenditure policy solutions that can address such risks. Instead of sticking to promised costs moderation, the authorities told the IMF that increased current spending, including on higher public sector wages, can be offset by “discretionary revenue measures”. In other words, should the Government want to fund pre-election giveaways to its preferred social partners (aka public sector wage earners) it can simply hike taxes on less favoured groups. A slip of the veil revealing the ugly nature of our politics-captured economic strategy.

Politics is now firmly displacing economics in both, the way we set our forecasts, as well as interpret the existent data.

Take, for example our reported nearly 5 percent growth over 2014. Various recent ministerial statements extoled the virtues of the Government that made Ireland “the envy of Germany” as the best performing economy in Europe. Largely ignored in the official rhetoric was that much of this growth came from the “contract manufacturing outside Ireland that is dominated by a few companies”. The problem is that none of it has any real connection to Ireland and, as IMF notes, much of it “could quickly turn”.

Private domestic demand, excluding aircraft leasing and investment in tech services-linked intangibles rose by closer to 3 percent. Again, according to the IMF this figure may be a more realistic estimate of the real recovery. In other words, somewhere between 30 and 40 percent of the recorded growth in 2014 was down to just one an accounting trick. And multinationals had plenty other accounting tricks up their sleeves that no one is bothering to count.

Even the 3 percent domestic growth estimate stands inconsistent with the data on household finances. Stripping out gains in household net worth attributable to the property markets, households’ financial positions hardly improved in 2014. Mortgages in arrears accounted for 23.7 percent of all house loans outstanding, when measured by the balance of loans, down from 25.6 percent a year ago. Based on the Central Bank data, at the end of Q3 2014, some 244,816 mortgages accounts (amounting to EUR46.1 billion) were either in arrears, in repossession, or at risk of arrears – a number that is roughly 4,500 higher than a year ago. Based on the Department of Finance data, 85 percent of all accounts in arrears ‘permanently restructured’ at the end of November 2014 involved arrears solutions that result in higher debt over the life time of mortgage than prior to restructuring.

Based on the Central Bank data, Q3 2014 household deposits in the Irish banking system stood at EUR85.9 billion, slightly down on EUR86.0 billion a year ago.

In part, the above figures translate into the improvement in banking sector performance at the expense of households. In the first half of 2014, Irish banks recorded their first positive return on assets since the beginning of the crisis, and the net interest margin (the difference between the bank lending rate and the cost of funding) rose to a crisis-period high of 1.5 percent. But credit growth remained negative, contracting at a rate higher than in 2011. Put this in simple terms, the banks continued to bleed their clients dry at a faster rate than the recovery was making them stronger, and there was preciously little observable improvement in households’ financial positions compared to 2013. Certainly not enough to claim the picture to be consistent with rapid economic growth.

The IMF isn’t undiplomatic enough to say that, but the Fund is clearly concerned more than the Irish authorities at this state of imbalances. As they should be: the Central Bank internal stress-testing for new mortgages being issued by the banks today is for the interest rates rising to over 6-6.5 percent over the life time of the loan.

Of course, the Central Bank is a myopic institution when it comes to telling us what effects such rates would have on existent corporate and household loans. But give it a thought. Currently, average existent mortgage on the market is priced at interest rates below 2 percent per annum. And with that, 17.3 percent of all mortgages accounts are officially in arrears, and 34.3 percent of all balances relating to mortgages loans are either in arrears, in repossessions or restructured.

Should the interest rates double, let alone triple, what mortgages default rates on currently performing mortgages can we expect? What amount of economic growth do we need to shore up our household finances sufficiently enough to escape the interest rate squeeze that even the Central Bank admits might arrive in the foreseeable future? Can the current trends in the recovery – the ones that are leaving households out in the cold, while superficially inflating official GDP figures – deliver any sense of sustainability of our economic performance across the financial, fiscal and economic areas in this country should even mild shocks take place?

One can only wonder as to the answers to these questions, as well as to the silence of our authorities on these topics.

Posted by TrueEconomics at 11:37 AM