BOFIT published an update on Russian external debt as of the end of December 2014. The update shows the extent of debt deleveraging forced onto Russian banks and companies by the sanctions.

Banks cut their external debt by USD43 billion to USD171 billion over the year, with much of the reduction coming on foot of two factors: repayment of maturing debt and ruble devaluations. Ruble devaluations - yes, the ones that supposed to topple Kremlin regime - actually contribute to reducing Russian external debt. Some 15% of banks' external debts are denominated in Rubles.

Corproate external debt fell by USD60 billion to USD376 billion, with Ruble devaluation accounting for the largest share of debt decline, as about 25% of all external corporate debt is denominated in Rubles.

So do the maths: Ruble devaluations accounted for some USD16 billion drop in banks debts, and some USD54 billion in corporate debt in 2014 (rough figures as these ignore maturity of debt composition and timing).

Additional point, raised on a number of occasions on this blog, is that about 1/3 of corporate debt consists of debt cross-held within corporate groups (loans from foreign-registered parent companies to their subsidiaries and vice versa).

All in, end-2014 external debt of Russian Government, banks and corporates stood at USD548 billion, or just below 30% of GDP - a number that, under normal circumstances would make Russian economy one of the least indebted economies in the world. Accounting for cross-firm holdings of debt, actual Russian external debt is around USD420 billion, or closer to 23% of GDP.


CBR latest data (October 2014) puts debt maturity schedule at USD108 billion in principal and USD20 billion in interest over 2015 for banks and corporates alone. Of this, USD37 billion in principal is due from the banks, and USD71 billion due from the corporates. Taking into the account corporates cross-holdings of debt within the enterprise groups, corporate external debt maturing in 2015 will amount to around USD48 billion. Against this, short-term banks' and corporate deposits in foreign currency stand at around USD120 billion (figures from October 2014).

In other words, Russian banks and companies have sufficient cover to offset maturing liabilities in 2015, once we take into the account the large share of external debts that are cross-held by enterprise groups (these debts can be easily rolled over). Of course, the composition of deposits holdings is not identical to composition of liabilities, so this is an aggregate case, with some enterprises and banks likely to face the need for borrowing from the CBR / State to cover this year's liabilities. 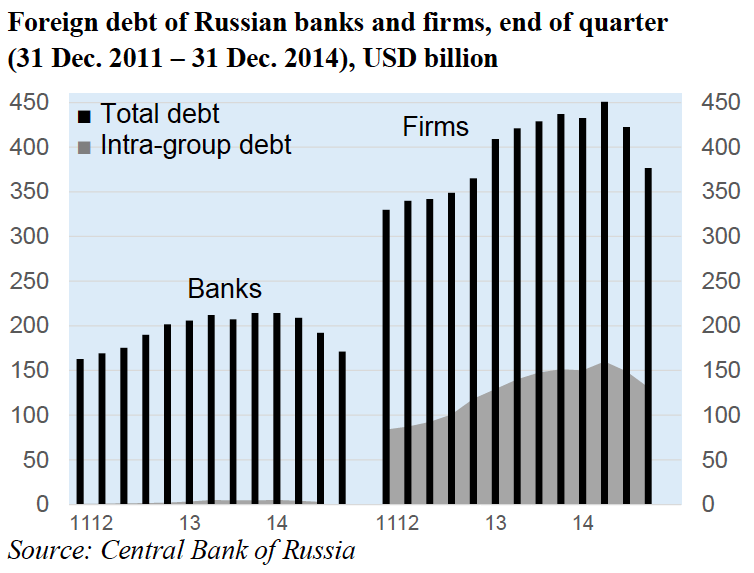 Just wondering what your position is on the Ukraine war?

Hi Sean - stated it both here on the blog and in the media before.

Ukrainian conflict is tragic, unnecessary and counter-productive to all parties involved.

Russian position is not justifiable and runs contrary to the core objective of assuring peaceful, democratic and functional Ukraine based on Ukraine's full right of self-determination. Russia should play a constructive role in the conflict, not provide a unilateral support to the separatists. Russia should exercise all of its power to compel the establishment of a binding and lasting peace process.

Ditto for the US and EU - both should take a position of agents for reconciliation, not for confrontation.

My view is that Ukraine needs some significant federalisation effort, but ultimately it is up to the Ukrainian people to decide - nobody's opinion from outside Ukraine can be a substitute for the democratic process. Ukraine also needs to make a huge leap on a number of institutional and policy reforms. It needs to mature socially and historically - a process being threatened by the conflict and by politicisation and polarisation of the Ukrainian society.

I am worried by the continued trends in all positions involved in the conflict, including those of the Ukraine itself.

My core objective defining my views is to see Ukraine emerge as a democratic, functioning state that is fully engaged, constructively and positively, with all its neighbours. Russia has a lot to think about as to how it can play similarly constructive and positive role forward. And so do the EU and US, and the Nato.

I hope this explains.

I think you are exactly right, it's not about deciding who is the worst but constructively working towards the best solution.

I can understand the East Ukraine/ Russian viewpoint. A violent revolution overthrowing a democratically elected president. It's a shame that Viktor Yanukovych could not have been persuaded to step down peacefully or for the protestors to wait one more year for his term to end.
I guess the vote distribution says it all

However, as you say, Ukraine would be better served by Russian peace brokering, rather than the current backing it gives based on ethnicity.

Anyway, it seems to be a great time to buy the ruble but I feel uncomfortable morally about such an action. Is it war profiteering?

Does buying the ruble validate Putin and does it matter? Is Russia no worse than the US, just with a terrible media profile. Statistically, there are more people per capita in jail in the US 707 v 470. Would Pussy Riot have gone to jail in the US? This is the nonsense that runs through my head. Have I been misled by Western media. I think if Putin wrote his version of 'Dreams of my father', we might have a better idea.

Apologies for babbling on and thanks for your analysis.

Next step after that will have to be agreeing a road map to change to achieve common objectives. Compromise is necessary by all sides and cooperation too.

Judgement is best reserved for history. Not to be diminished - to the contrary, to be strengthened by removing it from the hands of the trolls and ideologues on all sides of the conflict.

Problem is: we live in a world of judgement first, solutions last.

Well-funded by all sides, trolling of intellectual discourse is undermining Western democratic traditions of the freedom of speech and expression. But much worse is the impact of such approach to decision-making on Ukraine. The country is being torn between geopolitical objectives of five camps: Russia, DNR/LNR, Kiev, EU, US/Nato.

Logistically, any movement forward from this requires reducing the number of parties to the conflict and starting a functional dialogue. The former is achievable. The latter is not possible given the vitriol surrounding the debate.