Recently, Irish Times run an article about threats and challenges to Irish economic model (whatever it might be - I have no idea), concluding that all is down to 'political leadership' (whatever that might be is also something I can't comprehend). But in reality, a key threat to Irish economy is the threat of changing nature of global production and demand patterns, related to

But, setting aside the above considerations, what is the evidence of the growing threat from the emerging markets economies? Take a look at a recent paper by Benkovskis, Konstantins and Silgoner, Maria Antoinette and Steiner, Katharina and Wörz, Julia, titled "Crowding-Out or Co-Existence? The Competitive Position of EU Members and China in Global Merchandise Trade" (ECB Working Paper No. 1617: http://ssrn.com/abstract=2354238).

Keep in mind - this is ECB, so all conclusions might have been relatively placated or moderated to suit the prevalent narrative that things are going fine for Europe.

In their paper, the authors "analyse export competition between individual EU Member States and China in third-country goods markets."

Top of the line finding is that "competitive pressure from China is strongest for small and peripheral EU members, especially for the Southern periphery, Ireland and Central, Eastern and South-eastern European EU members. While we find no hard evidence for "cut-throat" competition between China and EU countries, we see an increasing tendency of smaller EU exporters leaving markets that are increasingly served by China." And another note of caution: data only goes to 2011, which means that whatever intensification in competition that might have happened in 2012-2014 - the years when European producers saw increased incentives to export due to sluggish growth in Europe, while Chinese exporters faced similar incentives to export due to decline in domestic returns on capital, and changing nature of domestic investment markets.

Authors note that "the extent of existent competition between individual EU members and China (observed at the margin of the markets served by EU members) is fairly homogeneous across all EU countries." Figure 1 below (labeled Figure 7 in the paper) "shows that the fraction of trade links where both China and the given EU member are active in two consecutive periods amounts to roughly 62% in 2009, up from 49% in 2001. Thus, mutual competition increased for all EU members."

More per Chart above: "With an overlap of 65% and beyond in 2009, countries like Portugal, Sweden, Ireland, Denmark and the Czech Republic face the strongest existent competitive pressure from China in terms of the fraction of markets where they are directly exposed to China. The group of large exporters shows an overlap of existent markets between 60% and 64%, while many small Eastern European countries and Greece only serve between 56% and 59% of their export markets jointly with China."

Out of all EU countries, therefore, Ireland is 4th most-exposed to competition from China. Good luck devising a 'policy leadership' for that.


What about the markets where China is not operating, yet? Authors have the following to say on this: "the fraction of “newly conquered markets”, i.e. newly established trade links by either an EU member or China where the other exporter did not already operate (figure 8 below), declined from 5.6% in 2001 to 2.4% by 2009 on average across all EU members. Thus, with heightened existent competition, the number of new market conquests where China was not active decreased in all countries over time. The decline was particularly pronounced for large exporter such as Italy, Spain, Germany and Finland. But a number of CESEE-10 countries likewise shows a relatively strong decline, such as Lithuania, Hungary, Poland and Slovakia."

Ireland faired a little better in terms of "new market entry" for China risks, but that is because we already face much more direct pressure from China's competition.


Next up, the potential for Chinese exporters crowding out Irish (and other European) exporters.

Per study: "the most interesting type of competitive pressure is depicted in figure 10. The four combinations which are summarized here all represent different forms of potential crowding-out of one exporter by its competitor. …As a first interesting observation, even taken together, these cases are less important than the creation of new competition. However, we observe an increasing trend over time. Furthermore, with 10% or more of all cases, in particular CESEE-10 countries and the small peripheral EU members are especially affected by this type of competition."

And, by the above chart, Ireland is under some serious pressure here too.

The authors disaggregate the bars in the above figure in order to "extract information on the crowding-out of EU countries by China."

"Figure 11 [below] shows the share of crowding-out cases in which an EU country exits a market which China has just entered or continues to operate. …[in] Germany [case] crowding-out is observed for only 4.8% of all trade links in 2009 [see chart above] and Germany crowds out China in half of these cases (Figure 11 below). In contrast, evidence for the CESEE-10 is mainly characterized by China crowding out the CESEE-10 countries (Figure 11), and, furthermore, the incidence of crowding-out increased markedly over time (Figure 10 above). The same holds true for the EU’s small peripheral countries Ireland, Portugal and Greece. In all three countries, 90% of all crowding-out cases refer to their exit from a market where China enters or is active (Figure 11 below). Compared with 2001, crowding-out by China has generally gained importance over crowding-out of China, particularly for the core EU members."

Again, Ireland is under huge pressure here from China.

Overall, the paper conclusions are uncomfortable.

"In general, we find that export growth is mainly driven by the intensification of existing trade relationships rather than by the formation of new trade links (extensive margin)." Here's a problem: Irish policy has been about opening new markets (jumping head-to-head into competition with China and other exporters), instead of maximising presence in the already serviced markets (holding onto and expanding exports presence in already profitable markets). And that is despite the fact that "…the extensive margin turns out to be more important for the CESEE-10 than for the EU periphery, the core EU countries or even China."

"Small and peripheral countries are more exposed to competition from China than the large EU export nations." And Ireland is even more exposed here, since we rely almost exclusively on exports as the driver for growth.

"…the crowding-out potential is considerably higher for the CESEE-10 and the small peripheral EU countries than for larger EU members…" As commented earlier, this is about the need to pursue more intensification of our exports, rather than constantly attempting to chase 'new markets' as the core exports growth strategy.


Finally, for illustration purposes, chart below maps the composition of European exports by category of goods. 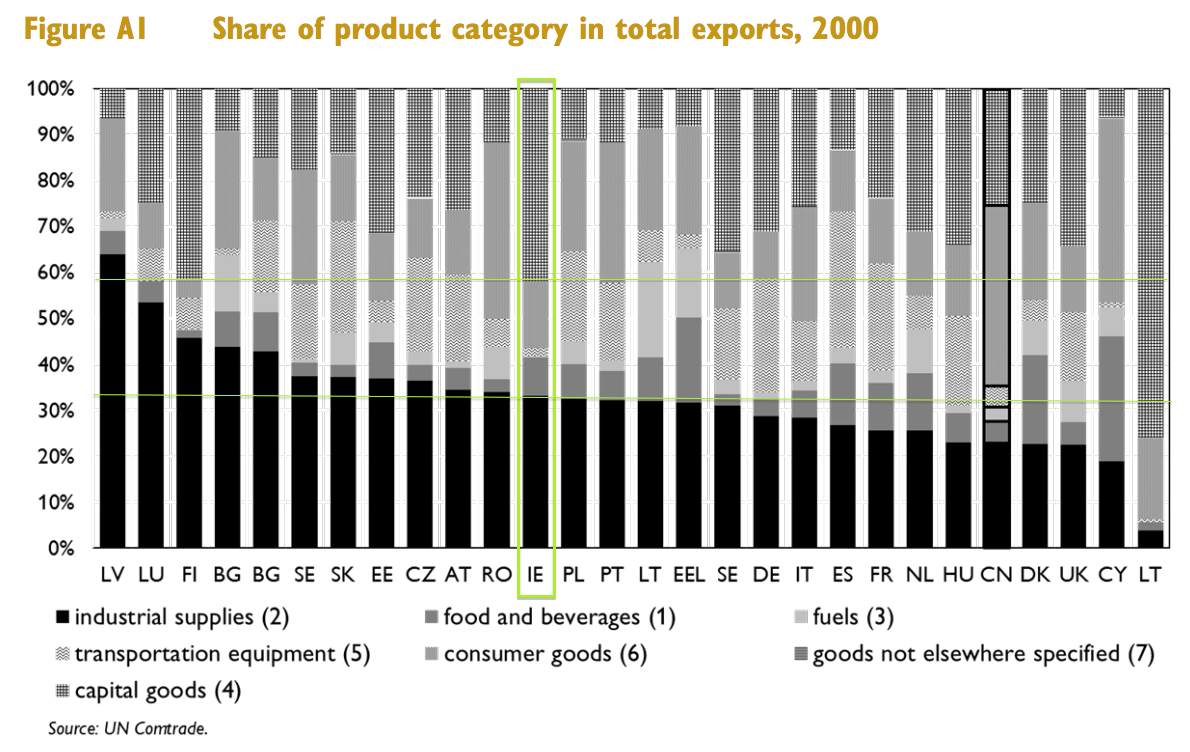 Posted by TrueEconomics at 11:59 AM