In the week this was, much of my attention was on Irish economy (given the Budget 2015 shower of news), so here's a quick catch up on Russian economy news.

Fresh off the printing press, Moody's downgraded Russia credit ratings from Baa1 to Baa2. Per Moody's moody grumblings: "The first driver for the downgrade ...relates to the longer term damage the already weak Russian economy is likely to incur as a result of the ongoing crisis in Ukraine and, relatedly, the additional sanctions imposed against Russia." More bad news: the agency is maintaining Russia's outlook at "negative".

Let's face the music: so far in October, Russian Central Bank spent some USD13.5 billion in a futile attempt to hold ruble from sliding against USD and the euro. This is not good news as it signals three things:

Chart below (via Bofit) to illustrate the degree of interventions and associated exchange rates: 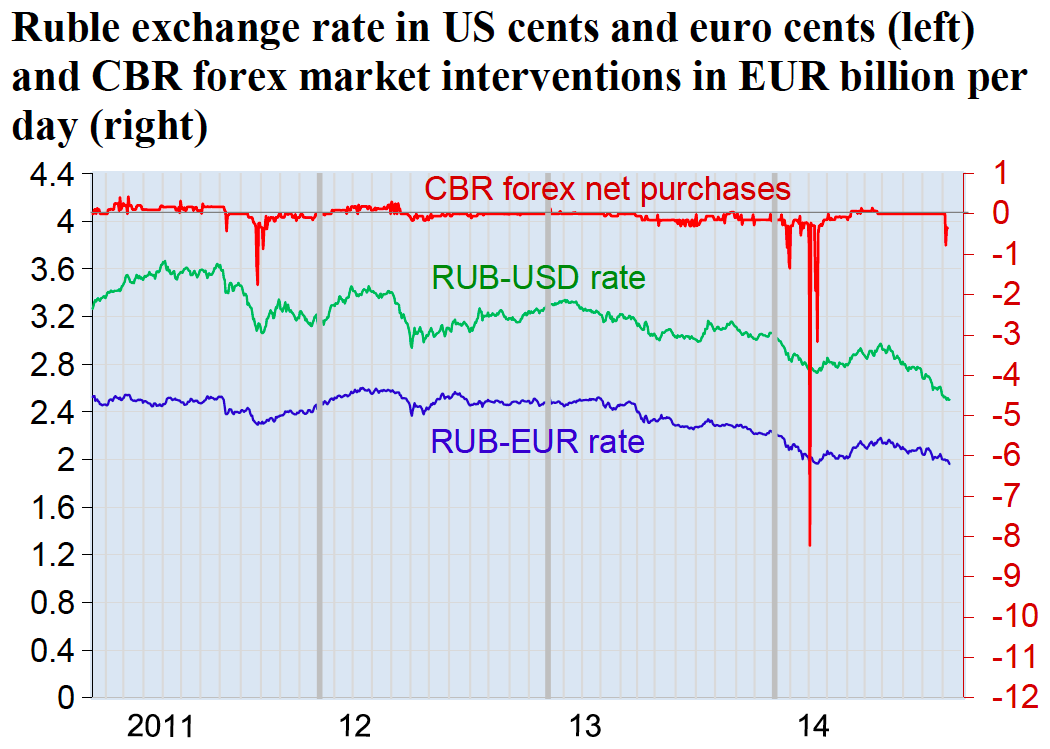 On the above point (2): Bofit reports that "Russian banks repatriated a record high amount of their assets from abroad in order to balance their forex positions as Russian firms and households reduced their domestic forex deposit accounts with Russian banks. ...Russia’s large state banks repatriated assets from abroad also in case there was an as-set freeze. Net borrowing of banks from abroad was strongly, and to an unusual degree, negative." In other words, banks were repaying foreign loans much more aggressively than rolling them over. Corporate capital outflows rose big time in Q3. This was driven by liabilities flows, which became negative in Q3 as companies aggressively paid down foreign debt and received virtually no new debt from abroad. It is worth noting that official capital outflows include not only funds expatriated abroad, but also private (corporate and household) funds converted into foreign currency, even if these funds never leave Russia.

And on the above point (2)(d), two weeks ago the rumours were so strong that the Central Bank of Russia had to issue a note denying the capital controls were under consideration.

The general sentiment in the EM asset markets is that of a heavy risk-reweighting in the mature economies pushing massive outflows of funds from the EMs. Risk-off sentiment is certainly on this week across global markets. Ongoing volatility is high and rising and signals general nervousness in the global markets. This is fuelling a strong sell-off in risky assets, especially in the EMs. Addicted to endless increases in liquidity supply, the markets are clearly waiting for the Central Banks to open the taps once again. Absent such action, there is no fundamental reason for current asset valuations in any region in the world.

With ruble plunging, imports are also falling off the cliff. Latest data from the Central Bank show Q3 2014 current account surplus hitting another 2 year high. Over 12 months through September 2014, Russian current account surplus averaged almost 3% of GDP. Goods trade surplus has been running at nearly 10% of GDP. This is despite a small decline in exports of goods and services in Q1 and Q3 2014 and virtually zero growth in exports in over 2 years. In contrast, imports fell 6-7% y/y in the first 9 months of 2014 and in Q3 2014. Goods imports declined 8%. Chart below (courtesy of Bofit) illustrates: 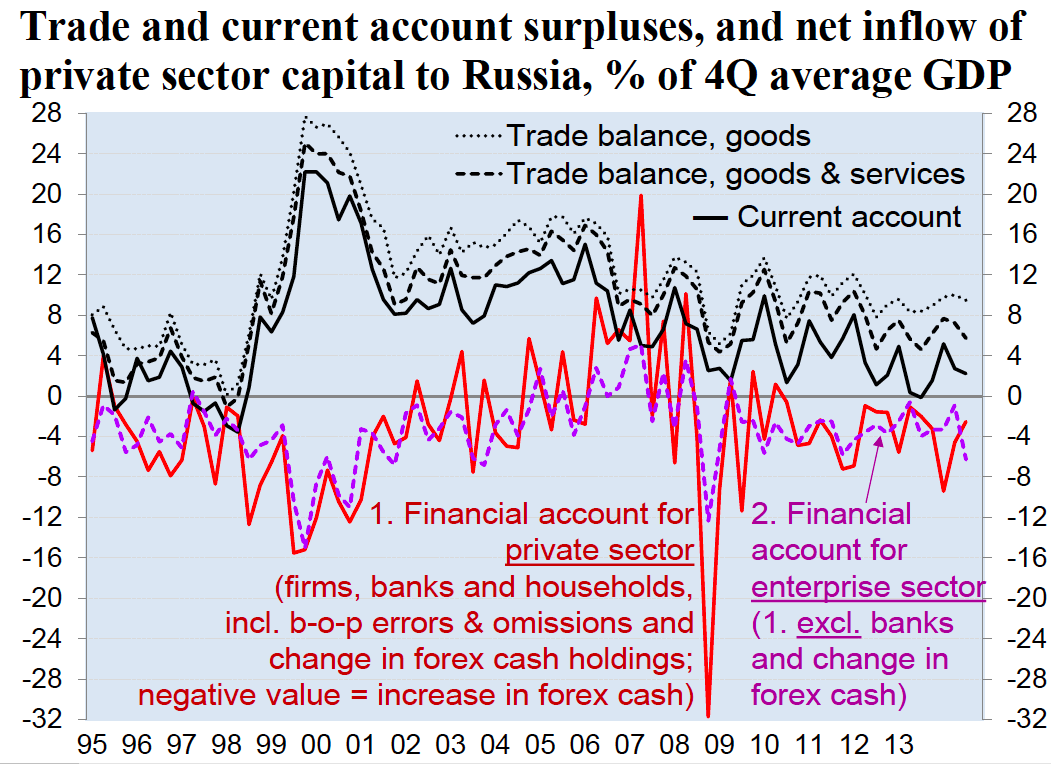 On the net, current account position is still strong, but trending around post-crisis levels. Lower oil prices should significantly harm this, especially as supports from imports declines start to wear out over time.
Posted by TrueEconomics at 11:08 AM