In light of the recent statement by the IMF about Ireland's broader measure of unemployment, let's ask two other simple questions:


Answer in two charts based on latest CSO data: 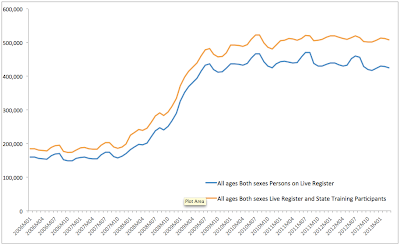 A1: In March 2013, there were 425,088 individuals on Live Register and in February 2013 (the latest for which this data is available) 83,421 individuals engaged in state-sponsored training programmes that receive Live Register supports, but are not counted officially as being on Live Register. Thus total number of those in receipt of unemployment supports in Ireland is 508,509 individuals.

This means that while Live Register official numbers have declined 2.065% y/y in March, total number of Live Register supports recipients has declined only 1.355% on March 2012.

To be exactly precise on this, take February 2013 figures alone: in February 2013, total number of those in receipt of Live Register supports was 512,297 which was a decrease in y/y terms of 1.45%, against the official Live Register decrease reported of 2.40%. 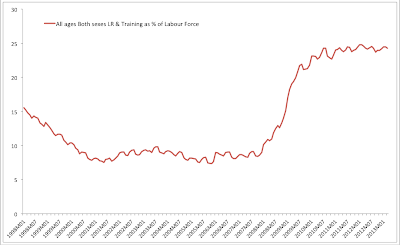 Again, the data is reported with different lags, so for exact comparative we have to go to December 2012 when 24.23% of Irish labour force were in receipt of Live Register assistance.

Oh, as a bonus, here's a historical chart showing Live Register supports numbers for Ireland since 1967: 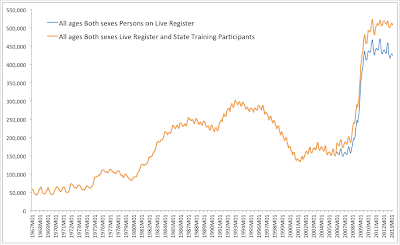 Posted by TrueEconomics at 1:13 AM

The Live Register was never meant to be used as a measure of unemployment.What about the ILO figures instead??Could we use them??My criticism of the Live Register is that it includes people who are working part-time,and excludes students and those receiving other social transfer payments!!

Do these figures include the self employed and small business owners whose businesses have closed and have no income? These people are surviving on their savings and family borrowings. If these people are not included in the figures, have you any idea how many there are?

As far as I know, self-employed and business owners are not eligible for Live Register supports, so no, the figures do not include them. How many of them are outside employment / work currently is hard to tell. CSO reports in QNHS (http://cso.ie/en/media/csoie/releasespublications/documents/labourmarket/2012/qnhs_q42012.pdf ) self-employed people status, table 5a (employed as self-employed) and Table 1a (unemployed seeking employment as self-employed). But what we do not know is self-employed who are currently out of job and seeking ANY employment status or those who dropped out of the labour force. So there are gaps...

Brendan, I don't use LR as a measure of unemployment, although it is a useful early metric for gauging unemployment via standardised rate.

Yes, for more detailed and more accurate breakdown, ILO works. It's the lags that make it less relevant for 'current' gauging.

It's be interesting to aggregate the disability claimants into the Live Register. This might get a better indicator of the total percentage of the workforce not working.

Also, how do non-working spouses/ partners fit into the live register figures?

Do you follow ZeroHedge
and also
"The Slog" wordpress blog.

Some worrying details about Capital flight from the Euro and also how EUROSTAT is releasing less and less timely information with regard to Euro and banking.

They are hiding major problems.....