For those who missed yesterday's Irish Times article by Brian Lucey and myself - here is the link. Of course, the followers of this blog would know most of these facts already.

Another article - my quick analysis of the Exchequer figures for January - is in today's Irish Independent (here).

And I actually do mean we are in a soap-opera land when it comes to policy. In fact, in July, I wrote for an investment newsletter a piece that provided a metaphor for our public finances condition as of June 2008 - a metaphor of a Wile E. Coyote frozen over an abyss nanoseconds before a disaster. Memorably, I was informed that the metaphor was taking things too far... Hmmm... was it? Judge for yourselves: 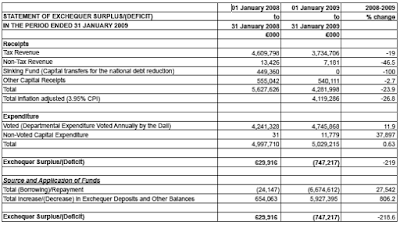 If you are still not feeling the wind whistling into your ears as Coyote gains speed, take a look at this... 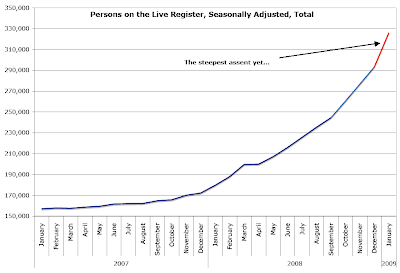 Two facts are apparent:
1) we are witnessing the steepest assent in the unemployment in years, with the speed of unemployment rise shown in the table below; and

2) DofF forecast in January 2009 was for the economy to reach 9.2% unemployment this year. Just a month into 2009, we are already there in standardized unemployment terms. DofF 2010 target for social welfare spending is based on the projection that unemployment will reach 10.5% or a notch over 372,000 in today's labour force terms. 2009 Live Register average was assumed to be at 290,000 in the Budget. In other words, at the rate of jobs losses in January, we are less than 2 months away from blowing through 2010 assumption, never mind the 2009 estimate!

2009 budgeting in October assumed unemployment at 7.3% 2009 (I wrote before about the abysmal quality of our boffins' forecasts here). The €2bn spending cuts were also based on this figure as a part of budgetary estimates. It is now crystal clear that DofF has grossly missed the estimate on social welfare and unemployment benefits. By how much? I will leave budgetary eggheads to do all the math, my guess is ca €2bn.

But it can be more. Why? Well, last year an unknown, but potentially significant number of foreign workers have left Ireland. This undoubtedly kept Live Register somewhat lower. But as the best and most employable workers leave first - because they have better prospects of gaining a job elsewhere - adverse selection will most certainly see marginal and poor foreign workers remaining. These workers face much lower prospects of gaining a job elsewhere, so on the margin, Irish unemployment benefits are much more lucrative an incentive for them to stay here. In other words, if emigration was keeping Live Register below what it might have been in 2008, the same is unlikely to happen in 2009 and 2010.

Good luck to all who bought rental apartments in the outlying areas of Dublin and across the country. With Poles and others heading either for the airport or to the dole office, the rents are going to follow land values - into agricultural pricing territory...

P.S. Given that our banks spent 2008 busy converting development loans into investment loans by forcing developers to turn completed properties into rentals, what does this mean for our banks' impairment charges? BofI at €0.30 and AIB at €0.50 after the recapitalization?.. The answer is unpalatable, but I will leave the numbers as an exercise for Ireland's best banking sector analysts...
Posted by TrueEconomics at 2:38 PM

you're stating facts there, any solutions

"you're stating facts there, any solutions"

At this point we have already past the point of no return. Simple as that.

To close the gap between Government revenues and expenditures now and in the future to an acceptable level will be a bridge too far, spending nearly circa €60Bn this year with 2009 revenue likely to fall to nearly €30Bn. And that's not even taking into account the multi-multi billion in bad debt write offs arising from the property bubble insanity that need to be covered thanks to the bank guarantee.

Unfortunately a Taoiseach traveling to Frankfurt, Germany looking for a lot of money will be the probable end result. The end of 87 years of economic independence.