Back from the snow

I am back in Dublin after a few days of snow-capped Italian Alps, great food, great wine, sunshine, crisp and clean mountains air. Friuli was, as it always is, a marvel!

What did I miss while away?

First, the recapitalization announced last week is not working. The magic, if a promise of the state taking a large chunk out of any future profitability, growth strategies and competitiveness of the Irish banks has had any magic in the first place, is now all gone. Gone because of the terms of this senile arrangement for all sides involved.
Here is how:
(1) The state is borrowing money at ca 5.5-5.7% in the market and injects money into the banks at 8%, earning risk unadjusted 2.5% return implying a risk-adjusted return (assuming our banks CDS spreads for last week) of ca -2-2.5%,
(2) The banks get money at 8%. Hostage to Government's demands on boards composition and lending, their profitability is shot for the foreseeable future,
(3) The banks are required to lend money out to businesses at... 8% (cost of funds) + admin cost (1.5%) so, say, ca 10% to repay the state,
(4) Businesses will stay away from this latest Government-engineered rip-off, while Ireland Inc's corporate and household balance sheets will still carry excessive levels of risk and debt and the economy will continue to spiral downward.
So, Minister Lenihan, the scheme cannot work even in theory. Forget about trying to make it work in practice.

Second, my favourite charts are updated to show that the things I missed while away were duly priced into Irish shares valuations by the market. Hey, at least the market still functions... 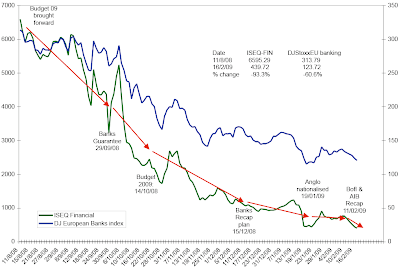 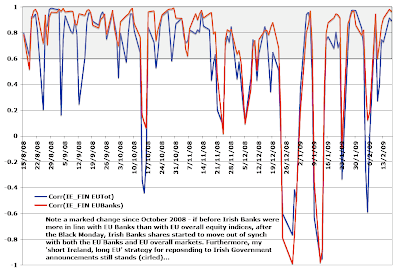 Third, I've missed some lively debates on certain 'academic' blogs about the pesky foreign commentators 'talking down' Irish Miracle Economy (and Government credit ratings). Needless to say, I am not amused:
(1) Some of those who made these comments themselves are keen on offering consultancy services advising foreign governments and commenting on their policies. Do their comments suggest that they claim a privilege to do what others should not be allowed?
(2) A part of this debate has finally exposed the undemocratic, technocratic nature of some of the members of the Irish intellectual elite. One commentator went as far as state that any publicly open debate exposes Ireland to the irrationality of the masses and that openness and freedom of expression thus are best reserved exclusively for discussions involving only 'informed' policymakers and analysts.

Which brings us to today's news: Irish 5-year CDS spreads have hit 378bps today, with a recovery rate of 40%, implying (assuming frictionless markets and no arbitrage) a lower bound of the Ireland Inc's default rate of 22%. Adding thinness of the markets (Irish bonds being traded in relatively small volumes, plus the half-day trading yesterday in the US) our implied sovereign default rate stands probably closer to 25%.

These are the resignable-level figures for our Brian-Brian-Mary Triumvirate of the Incompetents.
Posted by TrueEconomics at 8:55 AM

"One commentator went as far as state that any publicly open debate exposes Ireland to the irrationality of the masses and that openness and freedom of expression thus are best reserved exclusively for discussions involving only 'informed' policymakers and analysts."

With the caveat that I have no idea what blog you are referring to; I daresay there are many in govt and corporations that agree with him/her.

Which is really the root of the problem.
Attitudes like this are long dead in most areas of Irish life.
The delusion that these people are the only ones who understand the problem is an age-old issue.
However it could be argued (and I am doing so) that this snide, patronising and self-regarding attitude is the actual problem in Ireland; The current Economic travails, a symptom.

The current catharsis of peeking under the veil of govt/corporate management is the last remaining major totem in Irish society (after Church and Nationalism)to be toppled.

The very advent of the internet (ironically the medium through which they speak) and global communications renders them and their positions irrelevant at a stroke.
They are right to fear open discourse; it renders them extinct.
They would be better exercised fearing the populace in general, though, because if they keep fking up they may well have to answer for it.

Almost without exception, history has shown us that these people are called to account for their in-/actions. Whether by a baying mob or a byzantine tribunal, their days are numbered.

And, clearly, they know it.

I agree with your comment. It worries me much more that we live in a state of opacity when it comes to policies (the Social Partnership 'black box'), corporate balance sheets (the 'mutual help' corporate culture illustrated by the IL&P 'deposits' with Anglo) and public sector activities (the 'post-codes' paradox of An Post, where state enterprises and bodies act as tzars in their own sectors). It is a form of corruption that is much worse than the occasional bribery because this corruption is systemic and is sold to us as a necessary tool for conducting the affairs of the state and economy. We are conditioned, by the likes of the Social Partners, to believe that this clandestine clique of ruling elite is inherently good, because it is a not-for-profit or because it is 'managed' by the state. The problem, as I see it, is that intrinsically, we buy this proposition. Even today, when we are patently aware that the State is acting in self-interest against our own, taxpayer, health, we still look for a 'resolute action' from the Government, for a 'rescue package' or 'investment' or a means to 'share pain evenly'. All of this is a sign of Stockholm Syndrome - we are longing for our jailers to give us that extra hour of a break in the jail yard. Not for freedom, but for a more humane form of imprisonment. It does not even dawn onto our public to say 'Enough is enough. You are not worth my taxes, so I am not paying up this time' - neither to the state, nor to the unions, nor to Sean Fitzpatricks of this world.

You are right, one day, Ireland will be free, like Switzerland, of the need to know who the hell is sitting in the Leinster House, because the Leinster House and its inhabitants will be irrelevant to us. It can happen in two ways - the bad equilibrium (where the EU bureaucracy displaces Irish native bureaucracy, making us the subjects of some new opaque elite, this time with better dress code and taste for cars) or the good equilibrium (where our economy will learn to be independent of state 'investments' and 'incentives' by becoming like CRH, McEvaddy's, Ganley's, Aryzsta's of this world - global, not local). The path to the former lies through continued complacency and begging for some benevolent Government action. The path to the latter - through making sure you pay as little tax to the governing elites as legally possible and challenge the their local systems as frequently and directly as possible. Which, incidentally makes the foreign commentators questioning our status quo more patriotic than our own academics trying to suppress them. Simple, isn't it?