What if? - When the IMF knocks on neighbours' doors

In light of the IMF rescue packages for Latvia, Iceland and Hungary, it is worth looking at the conditions imposed under these loan contracts. While Ireland has not requested IMF assistance, yet, as probability of such a request rises (due to the deepening mismatch between Exchequer receipts and outlays), what austerity measures can the Irish Government count on should our rescue be structured along the lines similar to the above three states?

In answering this question (table below), I use the following comparatives:
(1) Current and forecast GDP and GDP per capita levels and growth rates;
(2) 2008 and 2009 budget deficits; and
(3) Relative extent of committed liabilities under various national rescue plans.

The estimates are presented under two scenarios for Ireland:
A third scenario - consistent with relative liabilities in line with those in Iceland would imply an improbable, but not an impossible demand for external funding of up to 58% of GDP. To err on the conservative side, I omit this scenario in the current post.

Finally, it is worth noting that I do not 'price-in'
Thus, these estimates should be viewed as lower bounds. 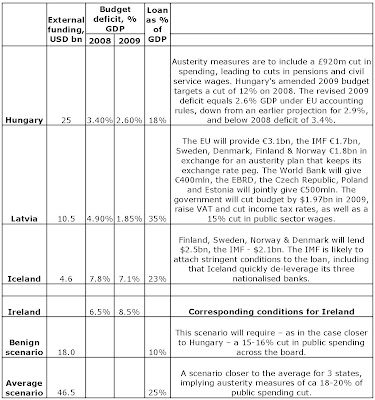 To date, the only sign of any 'austerity' measures coming from the Department of Finance is a vague rumor that Brian Cowen is looking for a 5% wage bill cut in the public sector. Whether or not this figure is gross of the wage increases granted in the latest Partnership agreement is a moot point, given the austerity measures of 15-20% estimated above.
Posted by TrueEconomics at 5:36 PM