The price of uncertainty

Here is something that we have been discussing in my Investment Theory course in Trinity’s MSc in Finance: the role of LTCM bailout in creating a self-perpetuating culture of “We are too big to fail” amongst the US, UK and even Irish institutions.

“Today, … that ad hoc intervention by the government no longer looks so wise. With the Long-Term Capital bailout as a precedent, creditors came to believe that their loans to unsound financial institutions would be made good by the Fed — as long as the collapse of those institutions would threaten the global credit system. Bolstered by this sense of security, bad loans mushroomed,” says Tyler Cowen.

How true this rings in the context of AIB and Bank of Ireland today! Indeed, their bizarre wobbling between “We don’t need capital injections” and “We’ll take some public money, please” speaks louder than Anglo’s surrender to the Exchequer. The message to the Government is clear – “Rescue us, but hold passing the costs – we are too big for you to let us fail”.

Tyler Cowen, however, puts this type of bluffing into perspective when he concludes that:
“John Maynard Keynes famously proclaimed that ‘in the long run we are all dead.’ …We’re not quite dead, but we are seriously ailing. ...we may be tempted again to put off the hard choices. But perhaps the next ‘long run,’ too, is no more than 10 years away. If we take the Keynesian maxim too seriously, and focus only on the short run, our prospects will be grim indeed.”

How? Well, those of you who were in my class last Fall would remember its core message: “Uncertainty and risk are all that matters in the financial markets”. In Tyler Cowen’s words:
“It has become increasingly apparent that the market doesn’t know what to expect and that many financial institutions are sitting on the sidelines, waiting to see what regulators will do next. Regulatory uncertainty is stifling the ability of financial markets to engineer at least a partial recovery.”

If there is a need for any proof of this – watch Anglo’s ADRs melting away in the US while the Irish market and the Government remain shut for the holidays: $0.12 on December 26.

Or here is the evidence in two charts and on a slightly more macro scale, plotting ISE Financials index performance against main policy shift dates and ISE Financials relative to S&P Banks index (both normalized to 100 at June 3, 2008). 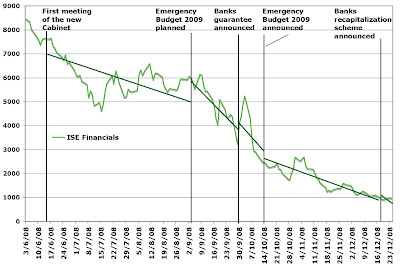 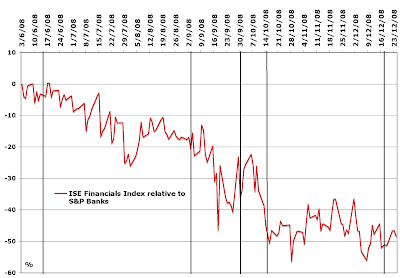 And this poor record has far less to do with the Anglo's or AIB's or BofI's fundamentals than with the short-termist and unconvincing policy performance by the Government. For all would-be-Keynesians out there, the gap between December 20th price (Anglo’s de facto nationalization announcement) and current price – a loss of 76% or $-0.38 per ADR – is, in effect, the latest revealed price of regulatory & policy uncertainty in Ireland. Steep!
Posted by TrueEconomics at 6:08 PM