To continue with my last post's theme:

According to the latest annual results, Anglo-Irish Bank’s loan book carries construction and property sectors exposure of roughly 87% (details in Table 1 below). Given this, the bank is, in effect, a property investment play in the Irish, UK and US markets. 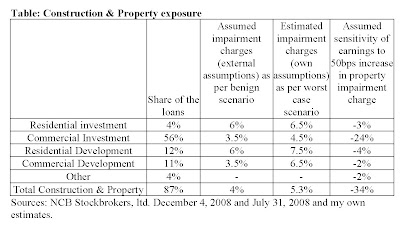 This implies that in the longer-term Anglo’s shares should follow market expectations concerning the ongoing property contraction in Ireland, US & UK. In other words, Anglo’s shares performance should reflect (with a possible lag to account for the differences in timing across the three markets) the fate of the specialty US real estate investors, e.g REITs.

The question is – does it?

Figure 1 compares changes in the valuations of these synthetic portoflia and Anglo-Irish Bank shares. 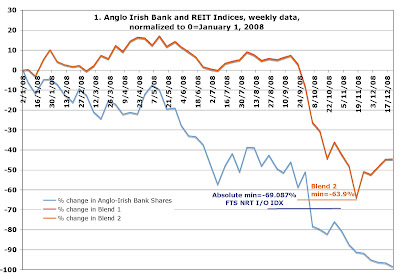 As shown above, US & UK REITs indices, blended to reflect actual Anglo-Irish Bank’s portfolio allocations of loans across various types of property have significantly outperformed Anglo’s shares since January 2008. While year-to-date decline in Anglo-Irish shares has been a dramatic 98.55%, the same period decline in US and UK REITs with exactly the same property markets and types exposure as Anglo’s was only 44.68%. Even at their lowest point (-63.9%), REITs performance was 54% better than that of the Anglo-Irish shares.

Using synthetic portfolio approach, REITs-based analysis predicts that the Anglo-Irish share prices should trade between €3.21 and €5.66 per share. Synthetic portfolio prices Anglo's shares at €3.75 at their global minimum in the first half of October, rising to €5.70 today.

However, the above does not account for the potential upward bias in Anglo-Irish Bank’s shares valuation prior to January 2008. In other words, we must address the argument that deep discounting in Bank’s shares reflects the fact that its peak valuations were more optimistic than the market average. To do this, I computed blended portfolia discounts from peak to January 1, 2008. Controlling for these, Figure 2 reconstructs the synthetic price share performance for Anglo-Irish Bank based on property markets fundamentals and accounting for the differences in timing in real estate contraction between the UK, US and Ireland. 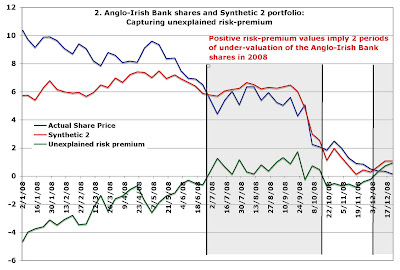 Thus, as shown in Figure 2, Anglo-Irish Bank shares have traded at a sector discount between late June and mid October 2008 and since the beginning of December 2008. Using full-sample simulation, Anglo-Irish shares are fundamentally valued at around €1.09 per share in the current market conditions as opposed to the actual share price of €0.15 today. Note the accuracy of the synthetic portfolio in tracking Anglo's shares since, roughly May 2008.

While the above exercise is not 100% accurate, it does suggest that the markets are currently discounting Anglo’s shares at a rate much greater (ca +13.7%) than warranted by the bank’s exposure to property markets.

While the first argument is impossible to assess, given the lack of data on Anglo-Irish Bank’s loans time structure, the second argument can be partially ‘priced’. The re-capitalization scheme will imply a dilution of existent shareholders’ equity to ca 20%. This suggests that the actual price target for the Anglo-Irish Bank shares should be around €0.22-0.25 per share. The associated regulatory risk-premium on the Anglo’s shares is, therefore, in the neighborhood of 69% of the share price.

No coincidence this estimate is so close to the 76% regulatory risk premium for the entire Irish Financials sector estimated in the preceding post…
Posted by TrueEconomics at 2:24 PM