Doing some research on the state of precariat in modern labor markets, I came across some interesting data from the 'poster country' of the post-GFC recovery: Ireland. 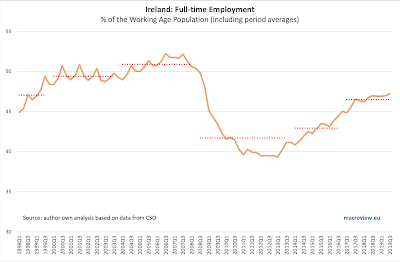 Ireland's economy and its recovery from the crisis are both characterised by the huge role played by the internationally-trading multinational corporations. In recent years, these companies have been gearing up for the upcoming OECD-led BEPS reforms (more on this coming up next month in my usual contribution to the Manning Financial publication, but you can read academic-level analysis o the BEPS here: https://papers.ssrn.com/sol3/papers.cfm?abstract_id=3406260). The strategic shift this entails involves MNCs domiciling into Ireland intangible property and new business functions to create a larger 'footprint' in the economy. With this, employment in MNCs operations in Dublin and elsewhere boomed.

Why is this important? Because the main story of the Celtic Tiger revival has been about the aforementioned jobs creation and accompanying dramatic drop in official unemployment. Less covered in the media and politicians' statements, over the same period of time as 'jobs creation' was allegedly booming, Irish labour force participation remained well below pre-crisis levels (meaning there were more discouraged unemployed who stopped being counted as unemployed). Even less attention has been paid to the quality of jobs creation.

The above chart partially reflects the latter concern. It shows that full-time employment as a a share of total working age population has improved from the bottom of the series at the peak of the recession, but the rebound has been largely incomplete. Similarly (not shown in the chart) the percentage of those in part-time employment as a share of total number of those in employment has remained above pre-crisis levels. Over 1998 through the first half of 2008 (the pre-crisis period), that share averaged 17.5 percent. This rose to above 23 percent in the years of the crisis (2H 2008 - 2013). It remained at around 23 percent through 4Q 2016, and has declined to around 20.3-20.5 percent since then. This too signals that the quality of jobs being added even in the mature stage of the recovery is still lagging the quality of jobs in the pre-crisis period.

Now, imagine what these figures would have been were it not for the MNCs latest tax shenanigans...

Posted by TrueEconomics at 1:15 AM