With the recent announcement of the so-called Phase 1 'Trade Deal' with China, the U.S. President has claimed that his Administration is winning the trade war with Beijing and that the U.S. economy is gaining from the rounds and rounds of tariffs and trade restrictions imposed on its bilateral trade with China.

Here is a tangible set of metrics showing the cost indices for U.S. trade (exports and imports) over the period of President Trump's tenure, compared to the track record of his predecessors: 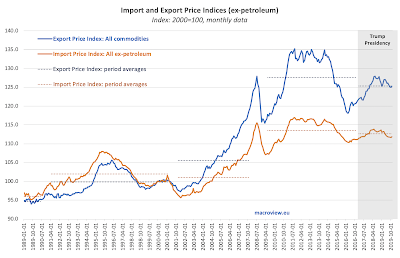 In basic terms, the adverse movements in imports prices have been more than offset by the positive movements in export prices since the start of the Trump presidency. However, two caveats to this warrant more cautious analysis of this data: 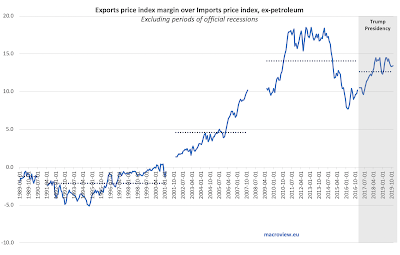 There is preciously little if any evidence in the trade prices indices to suggest that the Trump administration is either winning any trade wars or improving U.S. exporters' environment. If anything, there is more evidence that the U.S. economy is facing similar supportive tailwinds from global imports prices deflation to those experienced by its counterparts, and these are broadly in line with the tailwinds experienced by China: 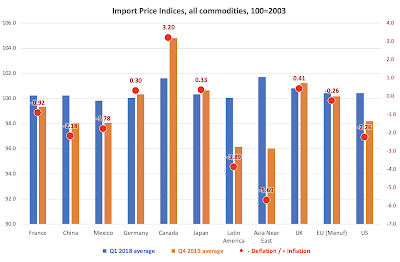 Posted by TrueEconomics at 10:10 PM