Base rate fallacy is one of the key behavioral heuristics or biases in economics and finance, defined as a cognitive error whereby too little (or too much) weight is placed on the base (original) rate of possibility (e.g., the probability of A given B). In behavioral finance,


Some research has shown that the key effect of the base rates on judgement error is that base rate presence distorts our analysis by making more frequent outruns of uncertain events more important in our analysis. Thus, more common realizations of the uncertain gambles are magnified in perceived frequency, overriding either the original priors (neglect) or the changing nature of the priors (inverse neglect).

You really can't avoid stumbling on both of these manifestations of the fallacy in today's Bitcoin markets analysis.

Take for example this: 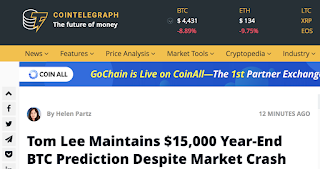 A 'guru' of Bitcoin investment world has been issuing absurd forecasts like a blind drunk armed with an AK47: fast, furious and vastly inaccurate.

The dude, armed with 'fundamentals' (unknown to anyone in the finance research universe, where predominant consensus is that Bitcoin has no defined price fundamentals), has predicted BTCUSD at $22,000-$25,000 for the end of 2018 some months ago (back in January). He upped the ante around March by 'forecasting' BTCUSD at $91,000 some time before the end of 2019, and scaled this back to $36,000 in May. He then re-iterated his $25,000 target in July, just around the same time another 'Hopium sniffing' 'analyst' - Julian Hosp - put a target of $60,000 for BTC in 2018. Four days ago, Lee scaled back his 'forecast' for the end of 2018 to $15,000. This comes on foot of the guru adding lots of mumbo-jumbo to qualify his optimism, saying in early November 2018 that he was "pleasantly surprised" by Bitcoin's stability around the newly found price floor close within the $6,400-$6,500 range.

Taking decreasing doses of the sell-side drug-of-choice, Mike Novogratz was a bit more 'reserved'. In November 2017, struck by the recency bias (the fallacy of not even bothering considering any information other than hyperbolic BTC price dynamics around the end of 2017), he 'forecast' Bitcoin to reach $45,000 by November 2018. This 'forecast' was trimmed back to $9,000 for the end of 2018, issued by Novogratz on October 2, 2018.

Note: this drivel has been reported by the likes of Bloomberg, CNBC, et al - the serious analysis folks, employing a bunch of CFAs. I mean, you wouldn't be conflicted if you employed institutional investors trading in Bitcoin as your analysts, would you? Of course, not! Next up: CNBC to hire Wells Fargo sitting executive to analyse Wells Fargo.

But returning to the behavioral anomalies, both base rate neglect and inverse base rate effect can (and do), of course, take place in the same analysts' decisions and calls. Framing - conditioning on surrounding attributes of the decision making - determines which type of the base rate fallacy holds for which 'analyst'. Hence, this: 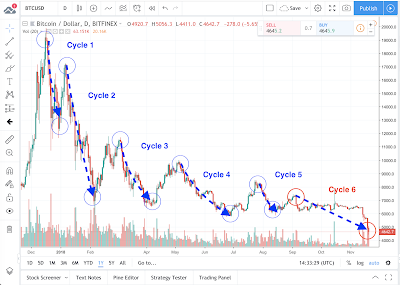 Ever since the collapse of the parabolic trend, Bitcoin price dynamics can be seen as a series of down-trending sub-cycles, with only one slight deviation in the pattern since mid-September 2018 (the start of the 6th cycle). I wrote about this back in August, suggesting that we will see new lows for BTCUSD - the lows we are running through this week.

When you look at liquidity (trading volumes), you can see that the 'price floor' period from mid-September through the start of November has been associated with extremely low trading. This runs contrary to the 'fundamentals' stories told by the aforementioned 'analysts': the increasing efficiency of the cryptos networks and mining, the growing rates of cryptos adoption in the real economy, and the rising interest in cryptos from institutional investors.

Put more simply, the period of 'calm' (and it wasn't really a period of low volatility, just a period of lower volatility compared to the internecine levels of volatility that BTCUSD investors have been conditioned to accept in the past) was the period when the Bitcoin Whales (large miners) stuck to their mine-and-hold strategies, so that pump-and-dump scams were running wreckage across smaller investors portfolios. The events of the last two weeks seem to have broken that pattern, removing the supports from one of the only two fundamentals Bitcoin has: the fundamental factor of cross-collaterlization a myriad of junky ICOs with Bitcoin capital.  (see volume dynamics below) 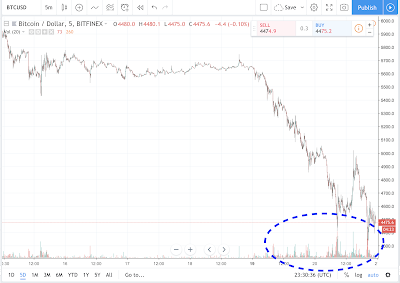 As the ICOs crash, their collateral Bitcoins are being dumped into the markets to recover some sort of liquidity necessary for a shutdown or a run from the creditors and regulators, the only floor that BTCUSD has is the floor of the Whales still sitting on large BTC holdings accumulated from mining. Which is not the good news the BTC 'analysts' can hang onto with their 'forecasts'. Cost of mining is rising (as local energy utilities are jacking up electricity rates on large scale mining operations). Just as profit margins on mining are turning negative (at current prices). This means that in the short run, Whales are going to start dipping into their BTC reserves to sustain operations. In the longer run, two things can happen:


Behaviorally, both mean that at some point in the future (no, I am not talking about end-of-2022 outlook, but something much sooner), the Whales will decide to cut losses and sell their holdings. As usual in such circumstances, first off, retail investors will step in to soak up some of the supply avalanche. The first sellers in this game will be the winners. The followers will be the relatively uninjured party. The hold-outs will end up with the proverbial bag in the end of the game. It is how all bubbles end up playing out in the end.

Posted by TrueEconomics at 11:41 PM