Ireland seems to have a twin dependency. or rather a triple dependency problem:


All of which means that the aggregate (and very broad) dependency ratio for Ireland is yet to recover from the decade-old crisis, and is below that for other small, open economies, for example, Iceland: 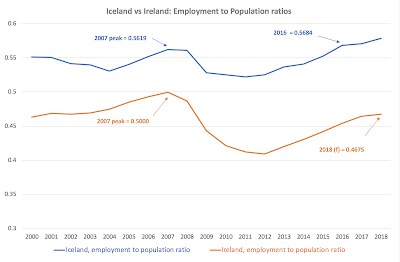 The latter observation was true before the crisis, but the onset of the GFC and the Great Recession have pushed Ireland’s employment to population ratio to such dire lows that the country is yet to recover from its woes. Iceland recovered its pre-crisis levels of employment to population ratio back in 2016. It also endured much less pronounced impact of the crisis in terms of ratio decline (peak to trough) and duration of the peak-to-peak cycle. Ireland is still climbing out of the mess, and the rate of recovery is expected to slow down dramatically in 2018 (based on the IMF data).

While many observers and analysts are quick to discount this ratio, the reality is that economy’s resilience to shocks, its productive capacity today (and, via on-the-job training, learning by doing and other forms of career-linked investments in productivity growth, its future capacity) are determined by how many people work in the economy per capita of population. The lower the ratio, the less income producing capacity the economy has, the lower the absorption capacity of the economy in the face of adverse shocks.

Posted by TrueEconomics at 3:17 PM