BRIC Manufacturing PMIs turned south in 3Q 2018 in line with Global trend, but leading that trend to the downside. Per latest data through September 2018:

Russia Manufacturing PMI averaged miserly 49.0 in 3Q 2018, down from anaemic 50.2 in 2Q 2018. This was the lowest quarterly reading since 3Q 2015 when the Russian economy was in an official recession. Russia is the only BRIC economy nominally in contraction territory, when it comes to PMIs-signalled manufacturing sector activity, and 49.0 is statistically close to being sub-50 reading as well.

Brazil’s Manufacturing PMI remained broadly unchanged on 2Q 2018 reading of 50.9 at 50.8 in 3Q 2018. Although notionally above 50.0 mark, statistically, the reading was not significantly different from zero growth signal of 50.0. This means that both Russian and Brazilian economies registered deteriorating PMIs over two consecutive quarters in the case of Brazil and 4 quarters in the case of Russia. 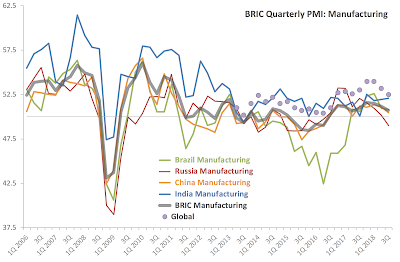 Posted by TrueEconomics at 3:46 AM