Do you, my friends love that smell of napalm in the mornings? Does it fill you with confidence about the future - your own and that of the rest of the world? For if you do answer 'Yes' to both of these questions, congratulations: you've made it into the American values (on average).

Here is the data from Pew Research on public trust in institutions: 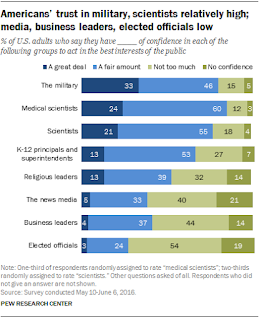 Democratic cornerstones of political leadership and the media are trusted by less than 50 percent of the Americans, 27 percent to 41 percent. Command & control institution of the military is trusted by 79 percent. Scepticism over coercive power and centralized counter-democratic system based on rank-command trumps all the softy stuff. even educators are more trusted in the settings involving more deterministic decision-making (e.g. medical sciences and sciences) than in more polemical setting (e.g. general education).

But if you thought European are all softy-dofty democratically minded, think again. In fact, there is not much of difference between the American population and the European ones on the same topic: 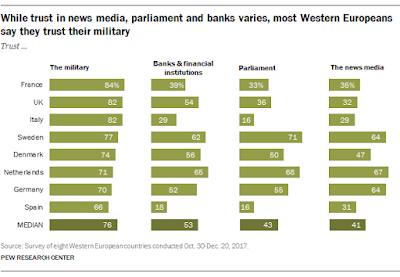 Yes, yes, I hear you, the choir of Patriots: but in a democratic society, military is subject to democratic checks and balances, so why is this degree of confidence in military a matter for concern?

Let me explain why:


What is happening, thus, as revealed by the above data, is the strong drift in public preferences away from democratic and liberal foundations of our modern states and toward more command and control, more coercive power-based institutions, such as military. To paraphrase one semi-failed leader of the past: it's public values de-democratization, stupid.

Posted by TrueEconomics at 4:25 AM