Recently, Fine Gael party PR machine promoted as a core economic policy achievement since 2011 election the dramatic reduction in Ireland’s unemployment rate. And in fact, they are correct to both, highlight the strong performance of the Irish economy in this area and take (some) credit for it. The FG-led governments of the recent years have been quite positive in terms of their policies supporting (or at least not hampering) jobs creation by the MNCs. Of course, they deserve no accolades for jobs creation by the SMEs (which were effectively turned into cash cows for local and central governments in the absence of any government power over taxing MNCs), nor do they deserve any credit for the significant help in creating MNCs’ jobs that Ireland got from abroad.

Now, to briefly explain what I mean by it: several key external factors helped stimulate MNCs-led new jobs creation in Ireland. Let me name a few.

So the result of all of the above has been a jobs boom in the MNCs-dominated sectors, a boom that soaked up quite a bit of the younger graduates from Irish Universities as well, but also helped to grow indigenous ICT sector in Ireland. The latter soaked up some more graduates. Unemployment fell. employment rose.

If this sounds like Nirvana, it ain’t. Because above the silver lining of the good and strong employment/unemployment numbers there is also a cloud of rather darker hues. That club is the Labour Force Participation Rate. 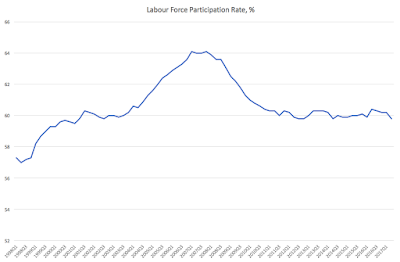 As Chart above shows, seasonally-adjusted LFP for Ireland stood at 59.8% in 2Q 2017 - matching the lowest recorded levels for the entire 16 years since the end of !Q 2001. And the lowest level in 13 consecutive quarters. Worse, as the chart above clearly shows, the dismal performance of the economy in terms of LFP has been in place since the Great Recession. In other words, all the recovery to-date has not been able to shift Irish participation rate.

Which brings us to the real point of the crisis: the current levels of LFP are much much worse than the comparable headline rates attained in 1999-2000. How? Simple.


And so on… in simple terms, our starting conditions (post-crisis environment) and our demographics all suggest that current LFP is reflective of deeper structural problem than the same LFP reading back in 2000-2001 was.

So, yes, Fine Gael can claim some strong record of improvements in the economy that took place on its watch. But, no, this is not the time to enjoy the laurels. Until such time when more Irish people go back to search for jobs, train for jobs and the LFP rises to 63.2% range (2005-2008 average), it is way too early for us to declare a victory over the Great Recession.

Now, what does 3.4% increase in LFP mean? To keep current rate of unemployment fixed at 6%, that means adding 70,450 new jobs and adding roughly 4,500 new unemployed to the Live Register. What that would take in terms of time? Given the current rate of 17,150 new employment added per quarter over the last 4 quarters, this implies about roughly 13 months of jobs creation.

Of course, attracting the disillusioned folks back into labour force is not as easy. So the more important bit is not whether we can achieve it, but rather, what would it mean in terms of economic policies necessary to achieve it? I expect answers from the various FG departments and may be even some Ministers…

Posted by TrueEconomics at 4:21 AM