The folks at Brown University have carried out the most detailed assessment of the disastrous costs of the U.S. wars fought since 9/11. The details can be found here: http://watson.brown.edu/costsofwar/. These are a must read!  While Russia stands accused by the U.S. of triggering the humanitarian crisis through its intervention in Syria (the civil war that started with the U.S. support and blessing), here is Brown University's conclusion about the real refugees crisis: 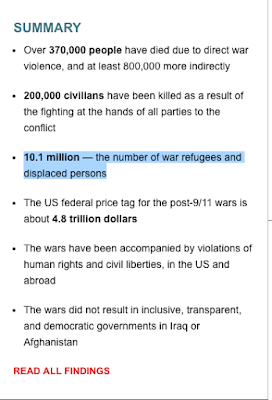 Not to say that one wrong (U.S.) makes another wrong right (Russia), but 10.1 million estimated refugees caused by the U.S. wars? This got to stand out, folks.

The U.S. has spent estimated USD5.6 trillion from 9/11 through fiscal year 2018 according to the study.

Enough to buy healthcare for every American, or to pay all outstanding student debt. Hell, in fact, it would have allowed for both.

And the above costs and impacts do not account for Libya, Egypt, Yemen and other direct and indirect 'minor' conflicts the U.S. has been involved in. The statistics do not include Syria.

In a recent post, I mused about the asymmetric warfare and the fact that, seemingly, outspending the entire world in terms of defense expenditures, the U.S. appears incapable of achieving its core objectives (see the post here: http://trueeconomics.blogspot.com/2017/09/12917-asymmetric-conflicts-and-us.html).

There appears to be no learning curve from the past 16 years - neither in the public minds (who support increasing expenditure on military industrial complex) and in the mind of the Washington politicians (see http://www.tomdispatch.com/post/176335/tomgram%3A_andrew_bacevich%2C_how_we_learned_not_to_care_about_america%27s_wars/#more).

And there is neither an increase in transparency in the American policies post-9/11, nor an increase in scrutiny of choices made (see http://watson.brown.edu/costsofwar/files/cow/imce/papers/2017/Linda%20J%20Bilmes%20_Credit%20Card%20Wars%20FINAL.pdf):

As folks from Brown University project conclude: "The wars have been accompanied by violations of human rights and civil liberties, in the US and abroad. The wars did not result in inclusive, transparent, and democratic governments in Iraq or Afghanistan... The human and economic costs of these wars will continue for decades with some costs, such as the financial costs of US veterans’ care, not peaking until mid-century. US government funding of reconstruction efforts in Iraq and Afghanistan has totaled over $170 billion. Most of those funds have gone towards arming security forces in both countries. Much of the money allocated to humanitarian relief and rebuilding civil society has been lost to fraud, waste, and abuse."

This is genuinely frightening!

Posted by TrueEconomics at 6:15 AM