There is a much-discussed in the crypto-sphere chart making rounds these days, plotting Bitcoin price dynamics against the historical bubbles of the past: 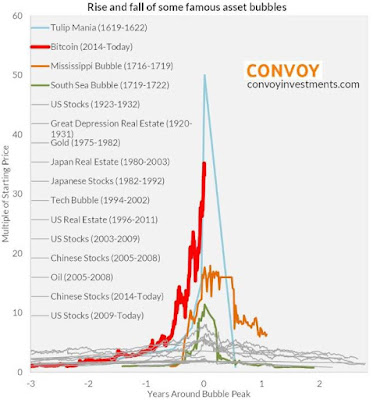 The chart is striking. Albeit simplistic. See Note 1 below for a technical argument on the chart timing.

On price dynamics alone, Bitcoin looks like a sure bubble - a disaster waiting to happen. But Bitcoin dynamics are basically not suited for any empirical analysis of any significant accuracy.

As noted by some commentators, Bitcoin had numerous 80-90% and larger drawdowns in the past (given its immense volatility). It keeps coming back from these. Some claim this to be the evidence that Bitcoin it not a bubble. Which is neither here nor there: bubbles are generated by exuberant expectations of investors, not by actual parameters of price processes. Causality does not flow from dynamics to bubbles, but the other way around. So to identify a bubble, one needs to identify exuberance. See Note 2 below for more on 80% drawdowns.

In the case of Bitcoin fans, there is clearly such.

No investor or serious analyst has been able to provide a fundamentals-based valuation model for Bitcoin.

A disclosure in order here: myself and a graduate student of mine have looked at the fundamental modelling for Bitcoin over the summer. We found no tangible relationship between any economic or financial parameters tested and Bitcoin price dynamics. In another piece of research, myself and two co-authors are currently looking at empirical dynamic and fractal properties of Bitcoin. Again, we finding nothing consistent with a behaviour of an asset with fundamentals-derived valuations.

Absence of evidence is not the same as evidence of absence. But, taken together with the general lack of credible fundamentals-linked modelling of the crypto-currency, this means that, at this point in time, Bitcoin price can be potentially driven solely by… err… expectations held by its enthusiasts, plus the incentives by the predominantly China-based investors to avoid extreme risks of capital controls and expropriations. If so, both drivers would make it a speculative bubble.

The only quasi-fundamentals-linked argument for Bitcoin has been the blockchain one - the promise of Bitcoin serving as a key tool for data aggregation, recording and transmission. This argument, however, no longer holds. Blockchain technology has migrated from public blockchains, like Bitcoin, to either open blockchains, like Ethereum or, increasingly more frequently, private blockchains. It is the latter that currently hold the promise to serve as viable platforms for data economy.

As a libertarian, I should like a private currency system that supports anonymity of transactions. As an economist, I should like the innovative nature of Bitcoin. And, put simply, I do. Both.

But as an investor, I do not have the stomach for Bitcoin’s valuations and volatility, as well as for its higher moments behaviour (in particular worrying are kurtosis, co-skews and co-kurtosis, which severely complicate empirical dynamics analysis, see Note 3 below). And I have even less enthusiasm for the crypto market that is sustained increasingly by undertakings, like BitMEX - a purely speculative platform trading some $35 billion in Bitcoin derivatives with leverage up to x100 to the amateur speculators who, put frankly, have zero idea what they are buying and at what price. The vast majority of Bitcoin investors have no clue what a butterfly option looks like and how it can be valued. And the vast majority of financial markets analysts and professionals won’t be able to price a butterfly strategy for Bitcoin, given its painfully twisted moments. Yet, within a month of starting trading, BitMEX reached 1/3 of the market capitalisation of Bitcoin. This is not just a shoe-shine-boy moment, folks. It is white-powder-under-the-nose-and--empty-bottles-of-vodka-on-the-floor hour for high school dropouts with cash to burn.

Another worrying issue with Bitcoin is the argumentation of its main supporters.

The first sort of argument exhibits not just Jurassic ignorance of logic, but also a gargantuan dose of arrogance. Repeated sufficiently enough, it signifies the absurd degree of exuberance of investors’ expectations.

The second argument is patently false. Bitcoin has undergone splits, and engendered dozens of other cryptos, with unlimited supply of such into the future. Bitcoin itself is divisible ad infinitum and, with forks, its supply is potentially unlimited. Worse, Bitcoin rests on man-made mathematical foundations. Which means it has no physical bound or constraint. Anything man-made (and even more so, anything mathematically derived) is, by definition, fungible and axiomatic. Just because to-date no one cracked the code to alter Bitcoin mid-stream or drain blockchain-held information does not mean that in the future such a code cannot be written. So hold your horses: gold is physically limited in quantity (even though in the Universe, it is not as scarce as it is on Earth, which makes long term supply constraint on gold potentially non-binding). Bitcoin is limited by our capacity to alter the underlying code defining it. Anyone thinking of an algorithm as a 'law' needs to go back to Godel's mathematics.

Finally, there is an argument of ‘liberation’. Bitcoin value is only sustained as long as it remains convertible into goods, services and other currencies. This means that Bitcoin cannot remain a government- regulation-free asset, as long as its popularity as a medium of exchange and a vehicle for store of value grows. Which means that in the medium terms (3 years or so?), Bitcoin will either cease to be, or cease to be anonymous. All protection from the dictate of the Central Bankers will be gone.  Benign tolerance of Bitcoin by some regulators can quickly turn into outright prohibition on trading - as current and past examples of China, Vietnam, Nigeria, Colombia, Taiwan, Ecuador, Bangladesh, Kyrgyzstan and Bolivia, Russia, and Thailand suggest. Evolution of cybersecurity measures and regulatory and supervisory tools, including their spread into cryptocurrencies domain will only increase effectiveness of such measures into the future. So, unless you are planning to live in a libertarian paradise, where legal norms of other states do not apply, good luck committing much of your wealth to Bitcoin as a safe haven for oppressive or coercive actions of the nation states.

Worse, anyone claiming that Bitcoin is a hedge against inflation fails to understand how modern markets work. Again, to increase in value, Bitcoin requires higher rates of adoption. Higher rates of adoption bring about higher rates of asset instrumentation (see above for BitMIX). Higher rates of instrumentation and adoption, taken together, imply higher holdings of Bitcoin by institutional and diversified portfolio investors. So far so good? Right, now the kicker: these holdings imply greater, not lower, positive correlations between Bitcoin and other asset classes in shock-experiencing markets. That's right, dodos: Goldman holdings of Bitcoin are correlated to liquidity supply in general markets, because if such liquidity starts evaporating, Goldman will sell Bitcoin to plug holes in other instruments. Sell-off in the markets can trigger sell-off in Bitcoin. Now, another kicker: Bitcoin is currently less liquid than any major asset class (see extreme volatility of pricing across various Bitcoin exchanges). Which means that smart folks at Goldman will be dumping Bitcoin before they dump gold and other assets. Hipsters hugging their laptops will be the last to wake up to this momentum (behavioural evidence suggests, they might actually buy into falling Bitcoin in hope of speculatively gaining on a bounce, which, incidentally, can explain why large drawdowns in Bitcoin can turn so fast into upward trends).

The tricky bit about Bitcoin is that its enthusiasts need to learn to live in the real world first. Until they do, Bitcoin will continue its upward path, and this process can go one for quite a while, depending on the supply of cash in the markets for Bitcoin. Once they are taught a sufficient lesson, however, the rest of us will be learning the long term fundamentals valuations of Bitcoin. I, for now, have no idea what these valuations might be.

So Bitcoin, then. A bubble or not? If you ignore the arguments that attempt to justify its valuations, it looks like one, albeit with dynamics that are very hard to interpret. If you listen to them, it looks that way even more, with more confidence in the arguments bogus nature. Draw your own final conclusions.

Note 1: In defence of the chart above, without validating its implied conclusions: the chart plots Bitcoin evolution from 3 years ago through today. This starting point makes sense. Until mid-2014, Bitcoin was extremely obscure, hype-only investor vehicle, with volatility so off the charts, any analysis of its dynamics was futile (I know, I did such analysis and presented the results in my talk at Bloomberg two years ago). Those us who do research in finance generally and routinely disregard the first 3-4 years of existence of Bitcoin for exactly that reason.

Note 3:  Interesting Elliott Wave analysis of Bitcoin dynamics here: https://atozforex.com/news/29-september-bitcoin-elliott-wave-analysis/ and here https://www.cnbc.com/2017/07/20/bitcoin-bubble-dwarfs-tulip-mania-from-400-years-ago-elliott-wave.html, although I am not convinced Bitcoin price trends are established enough for this technique to work.

Posted by TrueEconomics at 1:29 AM