Recently, I posted about the return - with a vengeance - of one of the key drivers of the Global Financial Crisis and the Great Recession, the rapid rise of the debt bubble across the global economy. The original post is available here: http://trueeconomics.blogspot.com/2016/12/161216-root-of-2007-2010-crises-is-back.html

There is more evidence of the problem reaching beyond corporate finance side of the markets for debt. In fact, in the U.S. - the economy that led the de-risking and deleveraging efforts during the early stages of the recovery - household debt is now once again reaching danger levels. 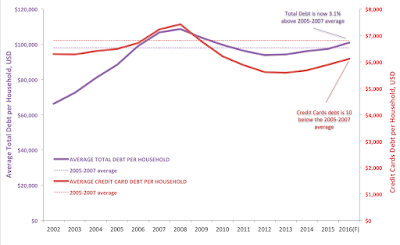 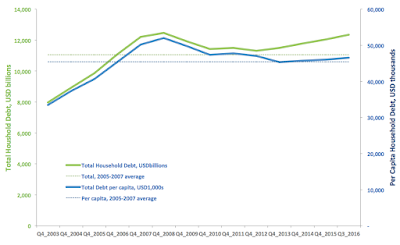 Now, consider the market expectations of 0.75-1 percentage increase in Fed rates in 2017 compared to 3Q 2016 (we are already 0.25 percentage points on the way with the most recent Fed decision). Based on the data from NY Fed, and assuming average 2015-2016 growth rates in credit forward, this will translate into extra household payments on debt servicing of around USD1,085-USD1,465 per annum depending on the passthrough rates from policy rate set by the Fed and the retail rates charged by the banks.

Given the state of the U.S. household finances, this will be some tough burden to shoulder.

And if you want another illustration, here is total global Government debt, based on IMF data: 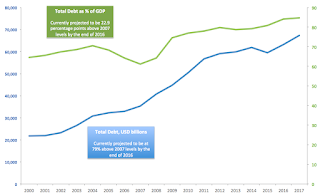 Posted by TrueEconomics at 3:42 PM