One of the persistent features of today’s economy is the decline in wage growth and lower returns to human capital, relative to financial capital. Starting with 2010 - the onset of the so-called ‘recovery’ from the Great Recession - annual hourly earnings rose only 2 percent (data through 2015), which is about 1.5 percentage points lower than prior to the Global Financial Crisis (GFC).

This phenomena is not exactly new, but it is becoming increasingly alarming from the point of view of contagion from economic displacement risks to political risks. You don’t need to travel far to spot the issue: just consider the recent U.S. Presidential elections, dominated (apart from dirt flinging between the candidates) by the plight of the disappearing middle class.

A recent paper by Stephan Danninger (IMF), linked below, titled  “What's Up with U.S. Wage Growth and Job Mobility?” tries to determine the key reasons for this change in the structure of the U.S. economy.

Danger documents the problem in chart 1 below: 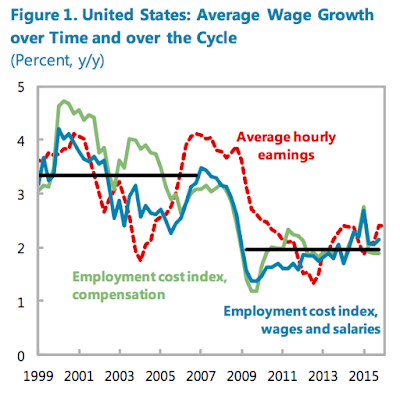 The above chart shows that the decline in wages growth has been pronounced in the face of other labour market dynamics, including the unemployment rate. Which suggests that structural change or structural factors should be more pronounced as the drivers of this trend. This contrasts with previous recessions, when cyclical factors dominate during the early stages of recovery. Per Danninger, evidence points to the fact that following “the deep recession and slow recovery” the U.S. have witnessed “skill erosion and reduced employability of marginal workers. Once labor demand picked up and employment reached workers less attached to the labor market, low entry wages, suppressed average wage growth.”

However, in addition to the above factors, “Davis and Haltiwanger (2014) and Haltiwanger (2015) have pointed to a secular decline in labor market fluidity and business dynamism as possible factors. With productive firms growing less rapidly and the speed of labor reallocation across sectors flagging, technological advances permeate slower through the economy. Labor productivity has been strikingly low in recent years averaging only 0.5 percent during 2013–15 and moves up the wage ladder have become rarer.”

Institutional factors also contribute to anaemic wage growth: “…declines in workers’ bargaining power as a result of less unionization and the emergence of alternative employment arrangements of the “gig” economy (Card and Krueger 2016; Mach and Holmes 2008) have further weighed on average income gains.”

So key findings are:

1) “…post-GFC larger declines in local unemployment rates are associated with smaller increases in average wages. …after controlling for the tightness of the local labor market, decreases (increases) in local (county-level) unemployment rates tend to reduce (raise) the average hourly wage rate in the same locality. The preferred interpretation of this effect is a moderating offset of average wage growth through the entry (exit) of low wage earners. This interpretation is consistent with recent findings that the reintegration of workers at the margins of the labor market is holding down median wage rates (Daly and Hobijn 2016).” In other words, when unemployment rises, layoffs predominantly impact those with lower wages (earlier in their careers, part-timers, contract employees, and those with lower productivity), and when unemployment starts to fall, re-hires tend to be of lower average quality than those who managed to stay in employment through the period of higher unemployment.

2) “…structural changes in the labor market are also affecting wage growth”. Which is the main kicker of the paper. Structural changes are those that extend beyond cyclical - recession-linked - factors and as such are long-term trends. Per Danninger, “the wage-growth-Phillips curve has flattened. Declines of unemployment rates …provide a smaller boost to wage growth after the GFC than in the past. …after 2008 wages of full-time full-year employed do not commove with local unemployment rates, while they did prior to the
GFC. …Labor market data up to 2014 no longer show evidence of a similar kink in the post GFC period.”


3) “Job-to-job change rates—associated with higher wage growth—have declined well before the GFC. …post 2000 demographic changes, in particular labor force aging or changes in education, cannot account for the sustained decline in job-to-job transition rates. Rather job-to-job turnover rates have fallen in all education and age groups, irrespective of the tightness of the regional labor market. This common feature is not easily explained by more positive interpretations, such as better job matching or higher return to job tenure (Molly et al 2016).” Traditionally, those who change jobs - job-to-job movers - earn higher wage premia in terms of moving to higher wage growth jobs from lower wage growth jobs. This no longer holds. 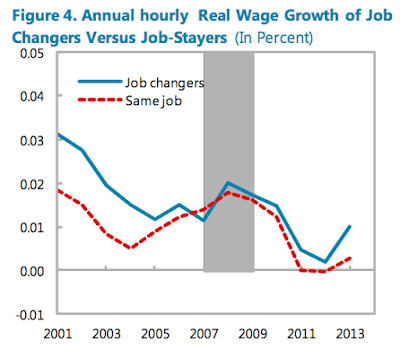 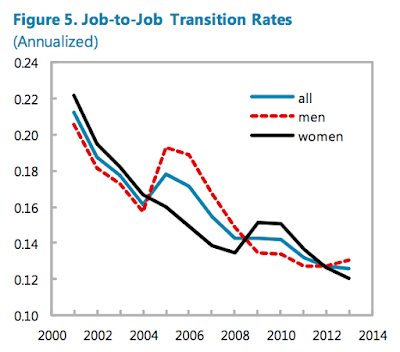 As Danninger notes, “these findings have important implications for future wage growth. In the near term, as continued job growth reduces the remaining employment gap — and with it headwinds from the re-employment of low-wage workers—average wage growth is expected to accelerate.” 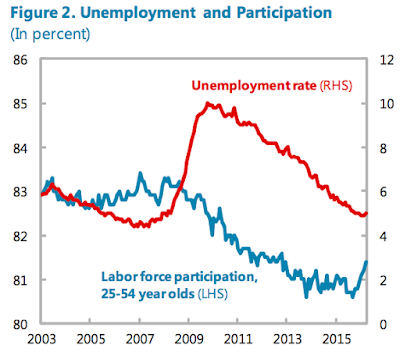 “However, a return to sustained high wage growth rates is uncertain. The
flattening of the wage-Phillips curve post-GFC points to broader structural changes in the labor market.”

So in summary, including my take on this:

Posted by TrueEconomics at 5:49 PM