An interesting piece of research from BBVA Research (April 2014) titled "The multifaceted world of exports: How to differentiate between export-driven strategies" dealing, in part, with explicit links between trade and growth across a large sample of countries (Ireland, unfortunately is not included, presumably because our exports are so massively dominated by the transfer pricing by the MNCs that even investment banks don't want to touch our data).

So one very important issue considered in the paper is the overall relevance of exports.

In summary: "Small and medium-sized East Asian economies lead on trade openness among emerging countries, while China outperforms in terms of the domestic connection of exports (i.e. related production generated by other industries). Latin American economies are below average in terms of openness, with Mexico additionally showing a very limited connectivity of trade, which is also the case of Indonesia. Poland outperforms in Emerging Europe as a more open exporter than Turkey and with better domestic connections than Russia." 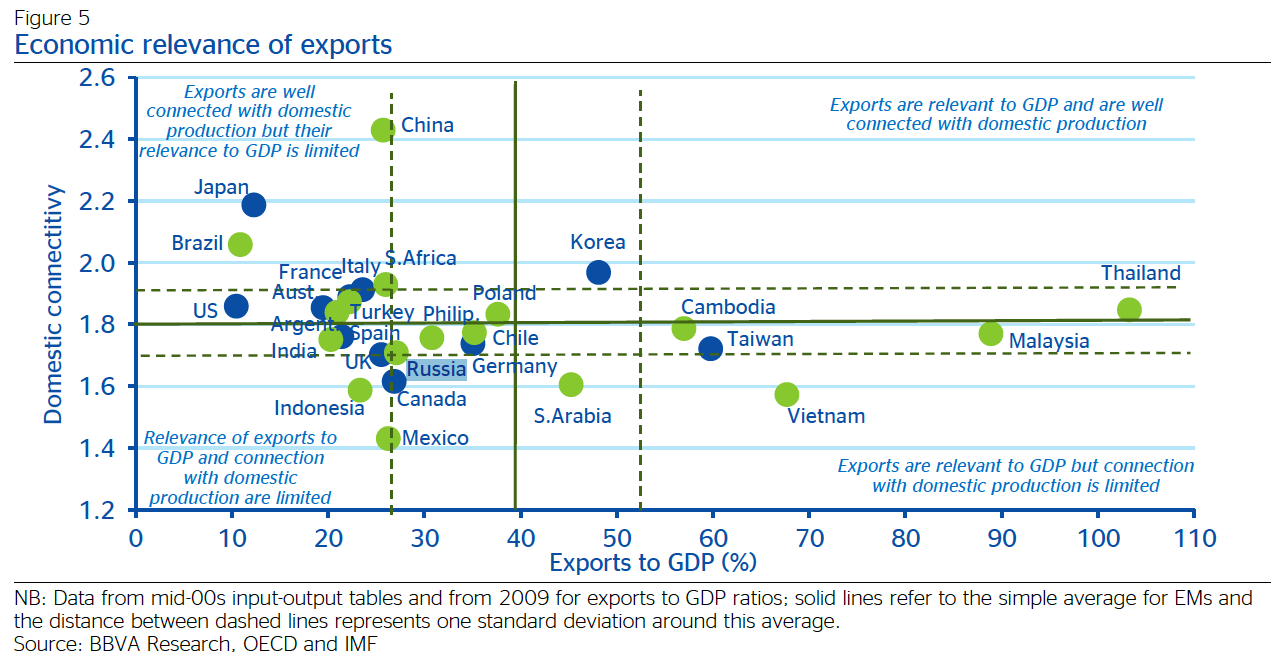 Noteworthy feature of this chart is that with strong input from financial services, the UK is virtually indistinguishable from Russia and Canada. The curse of the City seems to be as bad as the curse of oil.

1) Manufacturers tend to show more close links between exports and value added to the domestic economy (confirming my analysis from the PMIs for Ireland): "Domestic value-added in exports represents around 50% in manufactured goods, while this ratio is much higher for other activities, in which domestic natural resources, intermediation and labour intensity play a very important role. Among emerging economies, East Asian countries lag significantly behind in aggregate value-retention, while some commodity producers import a high share of final goods, which eventually drain the value-added generated at home due to the lack of manufacturing industries."

2) Diversification is a requirement for smaller open economies: "Product concentration is high for commodity exporters, as well as for specialised manufacturers, while China is the only emerging country with the global capacity to fix market conditions (not only from the supply side but also from the demand side). Saudi Arabia has that ability too for one very important sector: oil. In the case of small economies, for which world market power is much more limited, diversification is the remaining option for shelter from external turbulence."

I wrote about de-diversification of Irish trade that has been on-going with the switch in growth drivers from manufacturing toward ICT exports. But this is of far lesser concern or extent that what BBVA are noting for commodities-based economies. In some ways, we can even think of enhanced diversification happening in Ireland as pharma sector dominance is being eroded. Thus, the only concern in terms of future development is just how much concentration of trade will take place on foot of ongoing expansion of ICT services. For now, this is less of a structural problem than of the short term issue relating to distortions to our GDP and GNP.

3) Apparent technological content is not enough for success: This is a major kicker from our domestic point of view, as most of recent growth in our external trade came from expansion of technologically-intensive sectors. "Many emerging manufacturing countries have a significant share of exports with technological content rated as medium or high. However, none of them has a genuine surplus, as the majority of economies either also import a significant share of these products or just copy the technology or play an assembly role. On the other hand, India records a surplus in tech trade, with exports mainly comprising computer services." 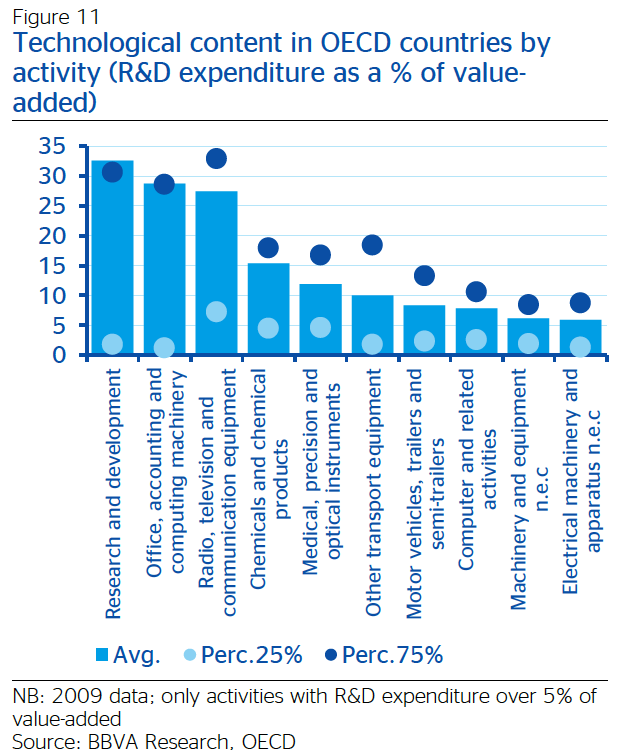