Here is the summary of their findings, followed by a closer look at the implications of these for Ireland. I have to warn you - the latter are highly disturbing.

The authors argue that although debt can be used to drive growth and development, "...history teaches us that borrowing can create vulnerabilities. When debt ratios rise beyond a certain level, financial crises become both more likely and more severe (Reinhart and Rogoff (2009)). This strongly suggests that there is a sense in which debt can become excessive."

The authors set out to answer a simple question: When does the level of debt go from good to bad? 'Bad' as in producing the effect of lowering long term economic growth in the economy.

To do so, the authors used a new dataset that includes the level of government, non-financial corporate and household debt in 18 OECD countries from 1980 to 2010.

The core results "support the view that, beyond a certain level, debt is bad for growth":
The table below shows the core results from the paper and adds the comparable data for Ireland (Ireland was not included in the analysis). Make sure you are seating before reading it:

As shown in the table above, using the study estimates, the potential reduction in Irish GDP growth over the long term horizon arising from the combined debt overhangs is 2.1%.

The table also shows that the largest impact from debt overhang for Ireland arises from corporate debt, followed by household debt. Despite this, our Government's core objective to-date has been to deleverage banks and to contain Government debt explosion. In fact, the Government is consciously opting for loading more debt onto households - by reducing disposable after-tax incomes and refusing to implement significant savings in the public sector expenditure.

Yet, folks, our debt levels are extreme. They are more than extreme - the table below shows comparable combined public and private (non-financial) debt for the countries in the study sample, plus Ireland. 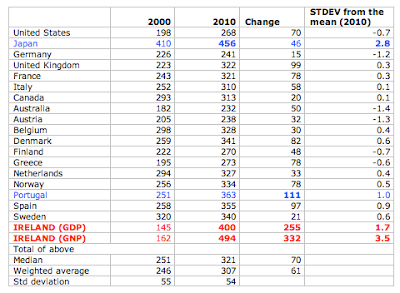 And the reates of our debt increase during the crisis are also extreme: 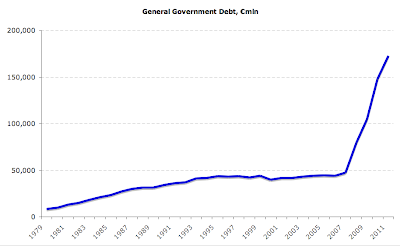 In fact, we have both - the highest level of debt to GNP ratio, the second highest debt to GDP ratio and the fastest increases in 2000-2010 in both ratios in the developed world. In the nutshell, this means we are more bust than the most bust economy in the world - Japan. Unlike Japan, however, we are faced with:
Yet, even exporting powerhouse of Japan is not delirious enough to believe their debt overhang can be brought under control via 'exports-led' growth.

Now, much of the issues and data discussed in this post relate to the question raised in the Dail by Peter Mathews, TD, who relentlessly pursues, in my view, public interest in raising such questions. The record of his question and Minister Noonan's answer is provided below: 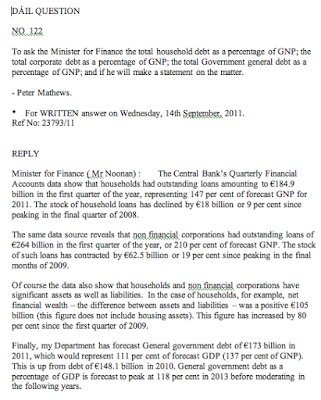 does the corporate debt include that of foreign companies in Ireland as it would be rather misleading (given they may have offsetting assets and the ownership is offshore so liability for the local population?)

I suspect the stats for debt at the national level are gross. Sadly for most nations they have few financial assets to offset but some noteable exceptions such as Japan have enormous reserves and various sovereign related entities with huge holdings of Treasuries etc. Japan's net government debt is roughly half the scare 200%+ number often quoted for example.

Thanks for the infomation Konstantin. You are one of the few commentators who make the facts clear in this mess. Are you aware of the experience of Guernsey? Guernsey created its own national debt free currency over 200 years ago, and continues to be an example of a small economy flourishing without being controlled by bank debt. It is a model for recovery for Ireland, as they have their own debt free currency operating alongside the debt ridden British pound. WHich means we could do the same thing, alonside the Euro. We could create our own national currency and re-liquify our seized up economy.