Here is the extended version of the article published by Globe & Mail on the topic of US Mint sales of gold coins.

Of all asset classes in today's markets, gold is unique. And for a number of reasons(i).

Firstly it acts as a long-term hedge and a short-term flight to safety instrument against virtually all other asset classes.ii Secondly, it supports a wide range of instruments, including physical delivery (bullions, coins and jewellery), gold-linked legal tender, gold-based savings accounts, plain vanilla and synthetic ETFs, derivatives and producers-linked equities and funds. All of these are subject to diverse behavioural drivers of demand. Thirdly, gold is psychologically and analytically divisive, with media coverage oscillating between those who see gold as either a long-term risk management tool, or a speculative investment, a "barbaric relic" prone to "bubble"-formation.

In the latter context, it is interesting to look closer at the less-publicised instrument - gold coins, traditionally held by retail investors as portable units to store wealth. Due to this, plus demand from collectors, gold coins are less liquid and represent more of a pure 'store of value' than a speculative instrument. Lower liquidity of coins is not driven by shallow demand, but by reluctance of owners to sell them when prices change. Gold coins are economically-speaking "sticky" on the downside of prices - when price of gold falls, holders of coins are not usually rush-prone to sell as they perceive their coins holdings to be 'long-term accumulations', rather than speculative (or yield-sensitive) investments. They are also "sticky" on the upside of prices - while demand is impacted by price effects (with generally higher gold prices acting to discourage new accumulation of coins), holders of coins are not quick to sell to realize capital gains, again due to entirely different timing to the holdings motives. Think of a person setting aside few thousand dollars worth in gold coins to save for child's college fund.

In late stages of the bubble, we should, therefore, expect demand for gold coins to falter compared to the demand for financially instrumented gold (ETFs shares and options). In the mid-period of bubble evolution, however, as retail investors just begin to rush into the asset, we can expect demand for coins to rise in line with demand for jewellery and smaller bullion. But we do not expect a flood of gold coins into the secondary market (and hence a collapse in gold coins sales) until literally past the turn of the fundamentals-driven prices toward the stage of mid-cycle "bubble" collapse.

The US Mint data on sales of gold coins suggests that we are not in the last days of the "bubble". But there are warning signs to watch into the future.

August sales by the US Mint were up a whooping 170% year on year in terms of total number of coins sold, while the weight of coins sold is up 194%. On the surface, this gives some support to the theory of gold becoming short-term overbought by retail investors (see chart below), but it also contradicts longer-term view that gold coins sales should fall around bubble peak. 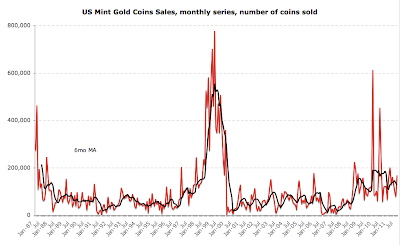 In part, monthly comparatives reflect huge degree of volatility in US Mint sales. Looking at the longer term horizon, since January 2008, US Mint sales volumes averaged 97,011 oz with average coin sold carrying 0.82 oz of gold, the standard deviation of these sales was 45,196 oz and 0.19 oz/coin, implying that August results comfortably fit within the statistical bounds of +/- 1/2 STDEV of the mean for the crisis period. Equally importantly, August results fit within +/-1 STDEV band of the historical mean since 1986 through today. In other words, current gold coinage sales do not even represent a 1-sigma event for the entire history of gold coins sales supplied by the US Mint and are within 0.5-sigma risk weighting for the crisis period since January 2008.

Neither is the current monthly increases in demand represent a significant uptick on previous months or years demand. At 112,000 oz of gold coins sold, August 2011 is only the 19th busiest month is sales since January 2008. It ranks as the 34th month in terms of the gold content per coin sold. Again, not dramatic by any possible metrics. Since January 1988 there were 87 months in which average gold content per coin exceeded August 2011 average and on 38 occasions, volumes of gold sold in the form of coins by the US Mint exceeded last month's volume.

Again, not dramatic by any possible metrics, especially once we recognize that in terms of risk-related fundamentals, August was an impressive month with US and EU debt crises boiling up and economic growth slowdown weighing on global equities markets.

Charts below illustrate these points. 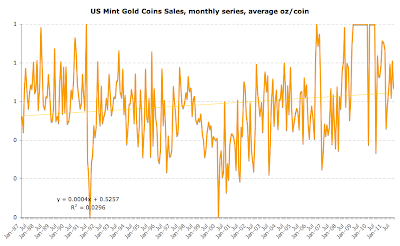 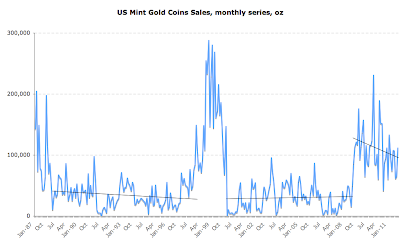 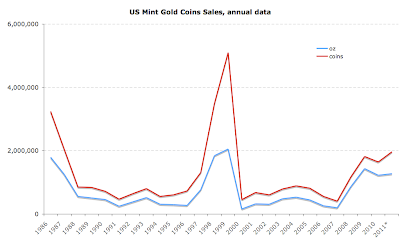 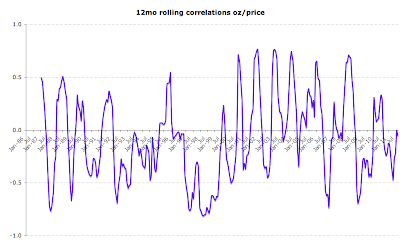 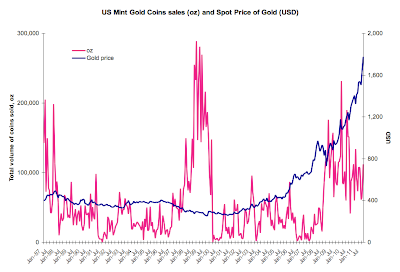 Given the state of the US and other advanced economies around the world since January 2008, this is hardly a sign of dramatic over-buying of gold by masses of retail investors. Instead, we are witnessing two core divergent trends emerging from the coins markets:

In short, there is no indication, in the data reviewed, of the bubble beginning to inflate (sharp rises in gold coins demand along the trend with prices) or close to deflating (sharp pull-back in demand for gold coins).

Of course, the evidence above does not imply any definitive conclusions as to whether gold is or is not a "bubble". Instead, it points to one particular aspect of demand for gold - the behaviorally anchored, longer-term demand for gold coins as wealth preservation tool for smaller retail investors. Given the state of the US and other advanced economies around the world since January 2008, US Mint data does not appear to support the view of a dramatic over-buying of gold by the fabled speculatively crazed retail investors that some media commentators are seeing nowdays.


Disclosure: I am long physical gold and hold no long or short positions in other gold instruments.


i These and other facts about gold are summarized in my recent presentation available at http://trueeconomics.blogspot.com/2011/08/20082011-yielding-to-fear-or-managing.html.

ii As shown in the recent research paper by Profs Brian Lucey, Cetin Ciner, and myself, covering the period of 1985-2009: http://papers.ssrn.com/sol3/papers.cfm?abstract_id=1679243
Posted by TrueEconomics at 7:52 PM