Weekend papers had some rumors concerning the An Bord Snip Nua's forthcoming report with figures in the range of €4bn being quoted as the overall level of 'savage cuts' to be recommended. I have no specific information as to the exact figure that the body will recommend at this time, but I have expressed serious concerns previously that the An Board's cuts will be short of what is needed to restore balance to public spending.

Current official DfoF estimates put the need for 2010-2011 'cuts' in expenditure at €3bn in current expenditure and €1.75bn in capital expenditure. This, alongside with €2.5bn and €2.1bn in new tax revenue, is expected (by DofF) to deliver the Supplementary (April) Budget 2009 deficit targets. Clearly, these targets alone fully subsume the An Bord Snip's rumored levels of cuts. But wait, DofF's Fremowrk Programme published in April 2009 shows (Table 7) additional cost 'adjustments' of €4bn in 2012 and €3bn in 2013. Thus, the total for 2010-2013 in cost adjustments envisioned by DofF is €11.75bn.

In other words, should An Bord Snip deliver on €4bn in cuts, it will be €7.75bn behind the DofF targets for current spending cuts. If the DofF were to be serious in delivering on its own deficit targets, this means that additional tax measures between 2009 and 2013 will have to add up to the above number, or roughly, €1,800 per person in Ireland. Mad?

Now, let us do the magic for our An Bord Snip folks and look at the levels (not sources of cuts needed). Per Revised Estimates for Public Services 2009, we have: 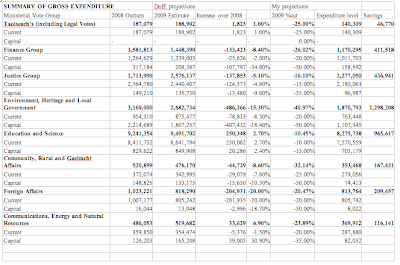 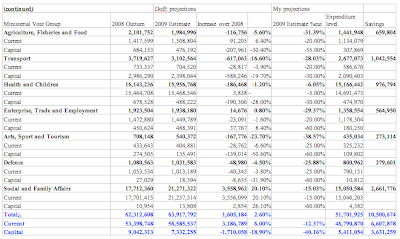 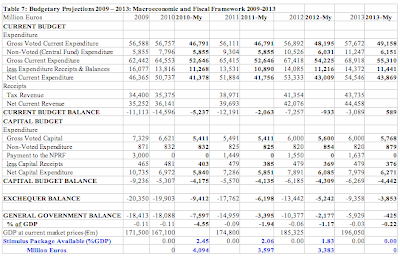 I guess, An Bord Snip can't be expected to worry about such minor numbers...


And while on the topic of Sunday papers: the report in the Sindo stated that the cornerstone of Brian Lenihan / Alan Ahearne's economic growth forecasts for 2011-2012 is their expectation that 150,000 people will leave Ireland in search of work elsewhere. If the Government and its adviser do indeed have such a 'policy' response in mind, I can chracterise it as:
One part of the report in the Sindo - the part that cites senior DofF officials stating that Lenihan's strategy for dealing with this crisis is to tax his way out of fiscal insolvency - is true. I can confirm that my own 'birdie' from the Upper Merrion Street has chirped last Friday that senior Department officials 'are very concerned' that Brian Lenihan and Co are 'only interested in grabbing more tax revenue... with no regard for the effects their new taxes will have in the future' post-crisis. In particular, several tax areas currently under pressure have been mentioned as being the targets of such 'revenue grab': income tax, carbon tax, property tax, and employee PAYE.
Posted by TrueEconomics at 3:58 PM

Thats -18bn on current plus capital budgetof 10bn, but say 7bn, as its easy to cut Capital Exps. Thats 25bn to be borrowed this year, plus redeem any govt bonds maturing (say 3bn), thats 28bn.

As govt is borrowing short, how much next year to be borrowed?, and allowing for FFs inabilty to address spending, 40? 50?. Can the state borrow that? 20-30% of GDP?

Yes, I agree with your assessment of the downside risk on revenue side. My estimates in the post simply used existent DofF projections, varying only expenditure side to reflect my balance sheet.

On bonds maturing this year - we have a growing pile of short-term bonds issued earlier this year that mature also this year, so that will have to be rolled over. On capital spending side - I think they are going to cut it back to ca €6bn, although so far they've budgeted for more than that.

Another problem will be issuing NAMA bonds.