Per Reuters report (here), IMF is about to publish long over-due Consultation Paper on Ireland.

IMF, allegedly, will recommend Ireland "retain the option of including additional types of loans, such as residential mortgages, in its "bad bank" scheme for housing bad debts".

This if proven correct will open NAMA to an additional downside of some €30-40bn in stressed residential property loans, which cannot be foreclosed or enforced for political reason. A costliest form of rescuing the ordinary homeowners, as compared with directly repairing their balancesheets via cash/assets injection. It will completely politicize NAMA. Hence, I will be revising my NAMA cost estimates upward in days to come.

The Indo reports that the IMF had calculated that Ireland's "structural deficit", which excludes the impact of economic fluctuations on revenues and spending, could be as much as 10 percent of Gross Domestic Product (GDP), or 18 billion euros ($25 billion). Brilliant. If proven right, IMF will be bang-on with my estimates from December 2008 and full 1.8 percentage points ahead of DofF numbers.

"It (the IMF) will endorse the widespread view that most of the correction must now come on the spending side, rather than through more tax rises," the Irish Independent wrote. Now, recall that Brian Lenihan and his adviser, Alan Ahearne, told us that no serious analyst was sugegsting, at the time of the Mini-Budget of April 2009 that the Government should focus more heavily on spending cuts, and thus, per Lenihan, huge tax increases in April budget were justified. Of course, many analysts, ncluding myself, replied that this was a lie back at the time. Now, IMF is falling behind our view.

Now, two things worth mentioning before the report is out.

First, a birdie told me that the IMF was 'convinced' by the Government to delay publication of its report until after the local elections.

Second, another birdie told me that the report was less watered down than usual, because the usual 'consultative' process where by the Governments get to vet some of the IMF's recommendations and analysis in rounds of bargaining broke early in April/May.

I am looking forward to this report...

CSO data on Production in Construction and Building sector:
When a picture is worth a 1,000 words... 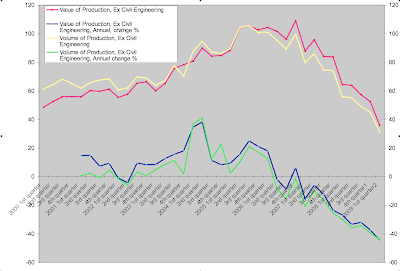 No signs of 'bottoming out' or 'Green Shoots' above Q1-Q2 2009 are dire and getting worse for the private building sectors. But what about the so-much touted 'Fiscal Stimulus' on our Brian-Brian-Mary 'Public Investment' side? 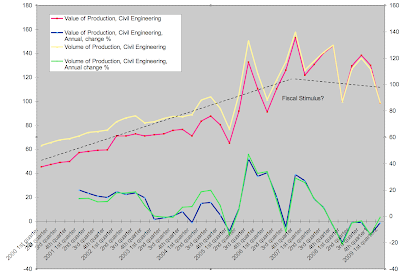 None! all is dead on Civil Engineering growth side, courtesy of a lie that is our public investment stimulus. 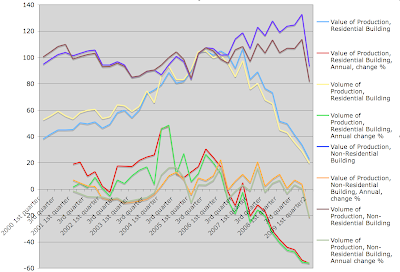 And things are getting much worse with time across the entire Residential and Non-Residential Building sectors. 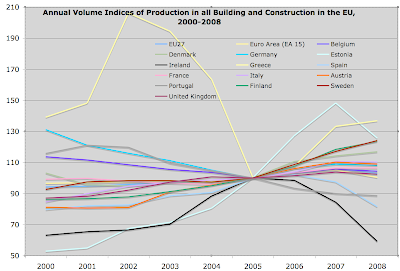 But do spot an odd one out...
Posted by TrueEconomics at 4:10 PM