So we have Ned O'Keeffe as Irish Politics answer to Homer - 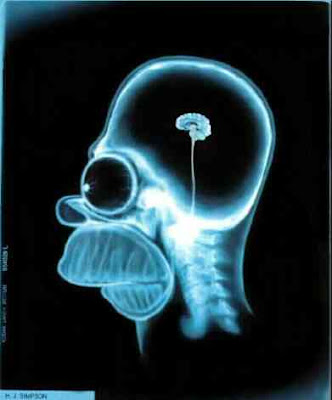 except the former's daftness is actually intended as political and economic view points... read here...

"What has Tesco offered us since they came over to Ireland?" said Deputy O'Keeffe. "I think we would be better off if Tesco were to leave Ireland altogether. Their absence from the Irish market would be taken up by other supermarkets who would fill the gap and hopefully it would lead to less exploitation of Irish food suppliers. We’ve already seem the damage that foreign banks have done to Ireland and how the Irish banks were forced to make up for their mistakes. Well the same could happen in the retailing sector with the foreign retailers such as Tesco ruining the Irish supermarket industry and putting thousands of people out of work around the country", Deputy O'Keeffe concluded.

This is either delusional or clinically mad. And it comes from a sitting TD. In fact, the statement is so historically, economically and socially illiterate, Mr O'Keeffe deserves no comment on this blog other than one word: FRIGHTENING!


And in case you are not scared enough by Ned 'The Belching Brain' O'Keeffe, look no further than the latest trip-to-the-light-fantastic from ESRI: Recovery scenario for Ireland in the medium term, calling for 6.5% GDP growth. Yes, you are reading it right - 6.5%!

How did they got so high? Well, they estimated that Irish potential GDP growth post-crisis will be 3.0% (down from their previous estimate of 3.6%). Then, they slapped on top of this an additional 3.5% to account for the severity of the downturn we are currently experiencing. So the logic is - the further you fall in a recession, the steeper will be the climb on the way up. Ah, if only the world evolved according to the ESRI model.

Per IMF earlier studies (including the one I covered in several previous posts and in my column in Business & Finance), current recession, globally and in specific countries, like the US, is likely to lead to a flat-line recovery in output. But don't trust my words - see in the excellent note from NCB's Brian Devine (here): 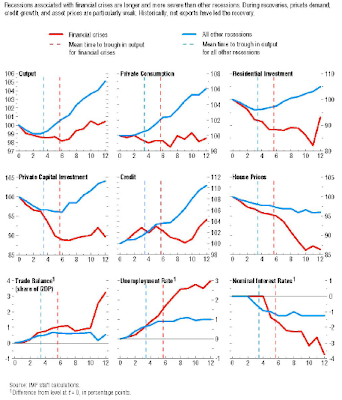 So ESRI is in effect assuming that Ireland will be unique in the world in experiencing stronger recovery post-crisis than other economies, including those that will drive Irish recovery - i.e. the US and UK.

Alternatively, you can read ESRI's 'forecast' as being driven by the rate of FDI inflows into Ireland outstripping in the rate of growth the US/UK domestic capital investment expansion post recession 2:1.

As Brian put it in his Friday note: "The ESRI have assumed that this catch-up process will cause Irish economic growth to average 6.5% over the period 2011-2015. We would be highly cautious of this growth rate because of: a) The difficulty in measuring potential output especially in light of the current shock to the domestic and global financial system. b) The uncertainty surrounding the pace of global growth, again because of the difficulty in assessing the potential output of our main trading partners arising from the damage to the global financial system. c) The uncertain effects on consumption of further tax hikes. We also believe that consumption will remain subdued because of the rise in the level of real indebtedness."

Well argued, although I would have put it in less polite terms.

Per NCB note, the summary of ESRI 'forecasts' and NCB latest forecast, alongside with my own estimates are shown in the following table: 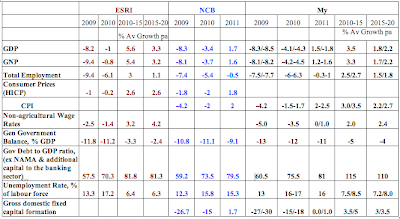 The difference between NCB's forecast, my estimate and ESRI's absolutely acid-sharp predictions is in assumptions...

As NCB note explains: "The conventional view of economic growth is that business cycle fluctuations in GDP represent temporary deviations from trend. In other words the economy eventually returns to a path determined by the potential of the economy. It is not abundantly clear that the current deviation from trend is transitory in nature. In other words it is quite possible that the problems in the economy are more structural in nature i.e. there has been a permanent loss of output relative to previous potential. The ESRI have acknowledged this and lowered the potential growth rate from 3.6% to 3.0% over the period 2005-2020 (driven by a significant part of the capital stock being rendered obsolete, the increase in taxes, the risk premium on borrowing and the reduction in global output potential). As a result of the current recession the ESRI estimate that there will be a permanent loss of the level of output relative to previous potential of 10%."

Ok, but... is 3.0 a relevant figure for the future? What reasons can ESRI bring about to set our potential growth rate close to the US and well above our main Eurozone competitors? Superior education system? Super-human entrepreneurship drive? Low cost base? Low tax rates? Fit and efficient public sector? Effective and pro-market Government? Workers who are accustomed to giving that extra effort and not expecting to be paid for it on the double? Competitive domestic service providers ensuring low cost of doing business in Ireland? Not likely. Shamrocks planted on a White House garden patch from the last Taoiseach's visit for Paddy's Day? More like it.

But here is more from NCB note: "As the ESRI note “In considering how the Irish economy is likely to exit from the current recession the key lies with the timing and nature of a world recovery.” Most of the world’s economies are forecast to grow at rates close to potential over the period 2011-2015 in the ESRI forecast." So why, again, does the ESRI assume that Irish economy will grow at more than double its potential GDP?

NCB also highlights timing issues in ESRI forecast: "Despite the fact that the pace of the decline in global downturn is likely behind us ...things are only getting less worse not better and the outlook remains highly uncertain, with the possibility of policy error large. The ESRI do take this into account by running an alternative scenario in which global growth does not recover until 2012 – in this case GDP growth in Ireland averages 5.5% over the period 2011-2015." So feel free to wonder - the world will still be in a recession in 2012, but ESRI's Ireland will be looking at a growth of 5.5% pa over 2011-2015? Let's take it apart: suppose 2012 the world is still in a recession, with growth of -1% - for the sake of an assumption. In 2011, obviously, things wouldn't be much better either, so let's say GDP growth is at -1.5% then. Now, to post average growth rate of 5.5% over 2011-2015 as ESRI predicts, Ireland would have to grow at a cumulative compounded rate of 34% between 2013 and 2015, or at an average annual rate of 10.25%! The ESRI use this as their pessimistic scenario...

So why are these unrealistically high numbers? Why now? Why from the ESRI? We can only speculate.

NCB's note says: "We think the greatest domestic risk to economic recovery is that the fiscal consolidation which has begun is not seen through or that taxes bear even more of the adjustment than currently envisaged (ironically the ESRIs document could halt the process of adjustment as unions/ government point to the fact that the economy is forecast to average growth of 6.5% in the future). This would have a major knock effect on consumption, competitiveness and borrowing costs and as such GDP growth."

That is, as far as I can understand it, a hint at something that I completely agree with. ESRI is a quasi-Governmental organization with no real independence in sight. In fact, what passes for 'independent' thinking in the ESRI's usual policy work is a mix of Labour's leftism in social policy department and Garret Fitz FG's legacy in taxation thinking (i.e the inherent inability of the ESRI to actually think rationally about tax burden and the damage it does to our economy). Hence, ESRI saying today that 'look - things are going to be just fine in couple of years' can be interpreted as their masters' signal to the unions and the social partners that the discomfort they might feel to be will be rewarded out of the spoils of the growing economy once again tomorrow. The timing of this rosy forecast - close enough to the elections is also, at the very best, an unfortunate coincidence.

Which brings us back to NAMA - why isn't the Government pre-committing itself to disbursing NAMA proceeds (if any gains occur) in the future to the taxpayers? Why isn't it ringfencing these proceeds? Perhaps, the NAMA upside is being held back to pay off the unions in the future through a compensatory wages increases after the crisis to the public sector workers for the income reductions they have suffered? or perhaps such a commitment has already been made? After all, the Bearded Men of the unions are not exactly fighting against NAMA, are they?..
Posted by TrueEconomics at 4:31 PM