Given the latest Exchequer results - i.e lack of any improvement in performance - and a combination of (anecdotally evident) acceleration of lay-offs in the financial, legal and accountancy services, recently on NewsTalk 106FM I predicted that we are going to see a July mini-Budget.

My logic was based on the following confluences of 'stars':
Some internal sources (hat tip to B) are now indicating that this indeed is being considered - or 'lightly penciled in' as I was told. In other words, we are in the stage of contingency planning for another raid by Genghis Brian Khan. The problem is that all the indication I am getting is that our an board chainsaw/snip is coming back with a whimper: to the question "Can we save some dosh?" the snappers will answer Bob-the-Builder-like "Yes we can", but to the question "How much?" they will have a goldfish-like response "O*o*p*o*gh*ph" and a bubble of air emanating out of the fat lips. The reason for this is that An Board Snip-identified 'savings' are now rumored to amount to nothing more than cutting temp contracts, which have to be honoured until maturity. In other words, not much of saving is possible in 2009...

Of course, to save big one needs: political will to break the unions and a reform plan to break the hysteresis in spending. But who has that? Brian? The other Brian? of Mary? In the mean time, there will be plenty of small scratches - €1-5mln here and there, but with a hole of some €30bn to be plugged this year alone, you have to do something BIG.

Now comes another new rumor - that a birdie chirped at my windowsill: the Revenue are now starting to worry that smelling the (rotten) rat from the Upper Merrion Street, our wealthy (what's left of them) are moving assets off-shore faster than Brian can shout 'Tax!" There is a rumor now, allegedly at the Dublin Castle gates, that CGT might come in at or near zero in the nominal terms in H2 2009 and this might even imply - considering bookings on CGT losses for 2008 - a negative CGT return! Now, that would be a nice lesson for the Government and for the likes of Fintain O'Toole and Vincent Browne - tax liquid wealth and see it evaporate.

Here's how it might turn out to be: charts below show my projections for CGT and CAT heads under 3 scenarios.

Scenario 2 assumes that the 2007/2008 dynamics apply to the trend that was established in 2009 to date. This is more pessimistic for CAT, and the intermediate scenario on CGT.

Scenario 3 assumes the same as Scenario 1 except I also consider the possibility of zero monthly returns on CGT in October-December 2009. How can I justify this assumption? Well, in 2008 for the same period, the Revenue collected €626.4mln in CGT. Suppose that this year, by October 2008 some €3.13/2=€1.55bn of Irish capital were to be 'B&B'ed abroad, with owners declaring a loss on these, writing off some €311mln. This will drive the CGT revenue to zero, even if the last year's performance were to be repeated. 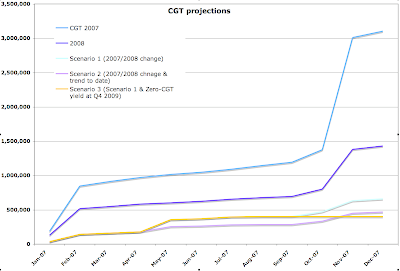 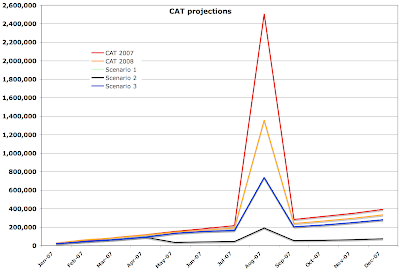 Of course, the problem could have been avoided should we chose to tax illiquid/immobile asset base - i.e land... in the long run, or should we have cut the idiocy of raising taxes in a recession... in the short run.
Posted by TrueEconomics at 1:26 PM