15/1/20: What Trade Deal Phase 1/N Says About the Four Horsemen of Apocalypse


Phase 1 of N of the "Greatest Trade Deal" that is "easiest to achieve' by the 'stablest Genius' is hitting the newsflows today. Which brings us to two posts worth reading on the subject:

Post 1 via Global Macro Monitor: https://global-macro-monitor.com/2020/01/15/phase-1-of-potemkin-trade-deal-signed-sealed-and-yet-to-deliver/ is as always (from that source) excellent. Key takeaways are: 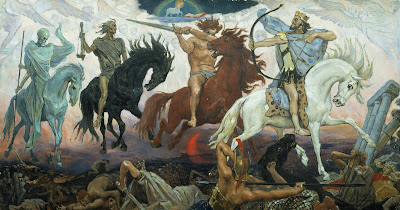 My takeaways from Phase 1/N thingy: we are in a VUCA world. The current U.S. Presidential Administration is an automated plant for production of uncertainty and ambiguity, while the world economy is mired in unresolvable (see WTO's Appellate Body trials & tribulations) complexity. Beyond the White House, political cycle in the U.S. is driving even more uncertainty and more ambiguity into the system. The Four Horse(wo)men of the Apocalypse in charge today are, in order of their power to shift the geopolitical and macroeconomic risk balance, Xi, DNC leadership, Putin and Trump. None of them are, by definition, benign.

The trade deal so far shows that Xi holds momentum over Trump. Putin's shake up of the Russian Cabinet today shows that he is positioning for some change in internal power balances into 2020, and this is likely to have some serious (unknown to-date) implications geopolitically. Putin's meeting with Angela Merkel earlier this week is a harbinger of a policy pivot to come for the EU and Russia and Lavrov's yesterday's statement about weaponization of the U.S. dollar and the need for de-dollarization of the global economy seems to be in line with the Russo-German New Alignment (both countries are interested in shifting more and more trade and investment outside the net of the U.S. sanctions raised against a number of countries, including Iran and Russia).

DNC leadership will hold the cards to 2020 Presidential Election in the U.S. My belief is that it currently has a 75:25 split on Biden vs Warren, with selection of the former yielding a 50:50 chance of a Trump 2.0 Administration, and selection of the latter yielding a 35:65 chance in favour of Warren. The electoral campaigning climate is so toxic right now, we have this take on the latest Presidential debate: https://twitter.com/TheDailyShow/status/1217431488439967744?s=20. Meanwhile, debate is being stifled already by the security agencies 'warnings' about Russian 'interference' via critical analysis of the candidates.

Mr. Trump has his Twitter Machine to rely upon in wrecking havoc, that, plus the pliant Pentagon Hawks, always ready to bomb something anywhere around the world. While that power is awesome in its destructiveness vis-a-vis smaller nations, it is tertiary to the political, geopolitical and economic powers of the other three Horse(wo)men, unless Mr. Trump gets VUCAed into a new war.

BoJo's UK as well as Japan, Canada, Australia et al, can just sit back and watch how the world will roll with the Four punchers. The only player that has a chance to dance closely with at least some of the geopolitical VUCA leaders is the EU (read: France and Germany, really).