Based on the OECD data for 2018, Ireland is the second worst OECD country to earn income from work at the upper margin of earnings (167% of the average annual gross wage earnings of adult, full-time manual and non manual workers in the industry), compared to lower earners (67% of the average wage earnings). And although this story is not new (we were in the same position back in 2014), the gap in effective marginal taxes charged on the higher earners relative to lower earners is getting worse. 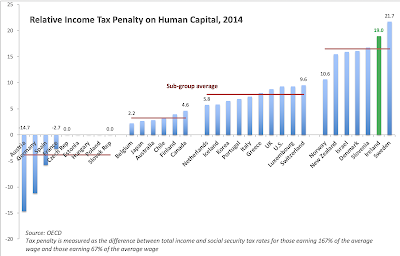 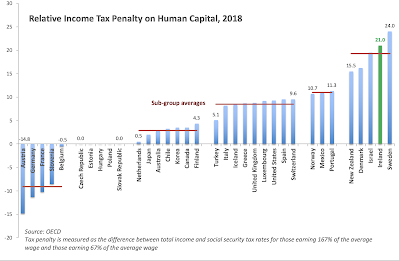 It is worth noting that in Ireland, voluntary spending on healthcare (indirect tax) is roughly 50 percent higher than it is in Sweden (https://data.oecd.org/healthres/health-spending.htm). Ireland spends less than half what Sweden does on early childhood education per pupil, and about 60 percent of what Sweden spends on tertiary education per pupil (https://data.oecd.org/eduresource/education-spending.htm). In other words, higher taxes on higher earners in Sweden seem to be purchasing substantially more services for taxpayers than they do in Ireland. Sweden also has older demographics and a somewhat functional military. Ireland has younger (lower health spending) demographics and not much in terms of a military expenditure. Of course, Swedish parliamentarians earned EUR 6,269 per month salary in 2918, when their Irish counterparts were paid EUR 7,878, but that hardly explains the gaps in spending and taxation systems.

So where all this tax penalty or surcharge on the higher earners levied on Irish residents is being spent? Clearly not on better financed education or health services, and not on military.

On a personal note, I do not think comparatives between Sweden and Ireland paint the latter in any better terms than the former. However, if one were to look at the OECD figures as some objective measures of tax burdens, Irish lower and higher earners (labour income) are overtaxed by the OECD 'norms' (average and median). When one takes into the account a relatively scarce supply of services to the taxpayers as well as a relatively higher out-of-pocket costs of the services supplied, things appear to be even worse. This is not a value judgement. It simply down to the plain numbers.