One of the key Bitcoin issues is concentration of miners. Concentration in Bitcoin markets occurs primarily due to high cost of energy used in mining. Bitfury, one of the largest miners on the market today already holds roughly 11 percent of the total mining power and is planning a major expansion. In mining equipment, Bitmain is estimated to hold some 70 percent of the market share worldwide. Here is the map - by country - of Bitcoin and other cryptos mining operations: 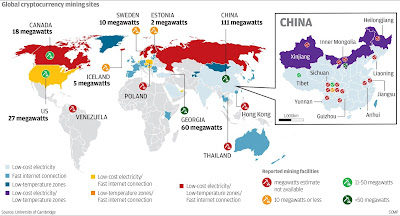 The above shows not only the traditional concentration risk (with China and Georgia dominating the market), but also the unsavoury nature of geopolitical risks links. China is a highly unregulated, non-transparent market with production of miners linked closely to access to energy that can be easily shut down by the Government, were it to decide to pull the plug on cryptos and their potential distortion of the markets for Renminbi. Georgia is a country with archaic energy grid and political regime with low degree of predictability.

Current market structure for Bitcoin is skewed, in terms of financial returns, in favour of a small number of large miners, mining equipment makers, exchanges trading Bitcoin and Bitcoin payments processors. The second tier of earners - due to high transactions costs - are local dealers, a handful of leveraged investment funds and earliest holders of Bitcoin (who are, predominantly, early stage BTC companies principals).

Which means that BTC’s primary function is transfer of money from investors to intermediaries and miners.

Current technology behind the Bitcoin is also skewed. Miners - who hold their own wallets and require no exchanges - are secure in their asset holding to the point of their own security. Exchanges are security pressure points for smaller investors who cannot efficiently transfer BTC to their own wallets (due to time lags and costs involved). Intermediaries are secure only to the point of holdings transferred to own wallets, and are not secured for any trading accounts held on exchanges. In fact, they are in the worst possible state, because their exchange accounts are larger in volume (more lucrative target for attacks).

Which means that BTC’s secondary function is transfer of funds from retail investors and traders to cyber criminals.

In neither part of the transactions chain there is any value added created, except for those ‘investors’ using BTC to launder money or evade capital controls. Other returns are pure speculation on BTC’s volatility and its trend (separately for both). As information/data storage and processing platform, BTC is useless: mining - which in theory supports both functions - happens irrespective of meaningful information arrival, which means that any blockchain functionality of BTC is ad hoc, or put differently, at best accidental. This is one of the key reasons why BTC is the worst thing that could have happened to blockchain and also why it is the best thing that could have happened to private blockchain.

Because BTC has no value-added component to it, there is also no possibility for price gains (capital gains) over and above those warranted by its function as illicit money transfer mechanism. Otherwise, BTC would have had an effect of creating financial value out of zero real value-added. Which is impossible outside pure behavioural hype and speculation.

When someone compares the BTC, in the above terms, to stock markets, they are simply revealing massive degree of ignorance. Stock markets have two functions: (1) Primary issuance that raises capital for the firms, and (2) Secondary trading that determines future Weighted Average Cost of Capital for the firm. As such, stock market creates value-added. It might be not exactly what drives stocks valuations all of the time, but in the long run, it is what determines these valuations to a large extent. Stock is a claim against current and future dividends and/or sale/M&A value of the firm assets. Speculation overlays the fundamentals for BTC. In the BTC case, speculation is the only fundamental.
So you can bet on BTC at any valuations you fancy for yourself, but be aware: if you are betting on it speculatively, you are facing a severe liquidity risk. If you are betting on its fundamentals, your bet is that more people around the world will embrace it as a vehicle for tax evasion, capital controls evasion and/or money laundering. Which might be fine in theory, except that theory assumes status quo ante of zero regulation, enforcement and oversight over BTC. Which, of course, is rapidly changing, as the countries like France are calling on G20 to impose global oversight over BTC, and countries like Japan, China, U.S. et al are either imposing increasing degree of tax and regulatory controls over investors in BTC or considering imposition of such. At any rate, does global drugs trade need a USD300 billion payments technology?..

But, hey, don’t just take my word for it. Read this: http://www.businessinsider.com/one-of-the-co-founders-of-bitcoincom-has-sold-all-of-his-bitcoin-2017-12?r=UK&IR=T.

Posted by TrueEconomics at 6:06 PM