15/10/17: Calling Brussels from Austria: Change Is Badly Needed in Europe


Austria just became a *new* flashpoint of European politics that can be best described as a slow steady slide into reappraisal of the decades-long love affair with liberalism.

The People's Party is best described as Centre-Right with a leaning Right when it comes to issues of immigration. Current Foreign Minister Sebastian Kurz, the leader of the People's Party is a charismatic 31-year old populist. He has driven his party further toward the Right position in recent months, as elections neared, and away from his post-2013 governing coalition partners, the Social Democrats. Kurz is, broadly-speaking a pro-EU candidate, with strong preference for more autonomy to member states. He is clearly not a Brussels-style Federalist.

The Freedom Party (FPO) was close to its record vote of 26.9 percent, achieved back in 1999, and now has a good chance of entering the government as a coalition partner to People's Party, for the first time in some 10 years. The FPO was in Government last in 2000-2007 and prior to that in 1983-1987.  It's last stint in Government earned Austria condemnation from the EU. Following the previous coalition, the OVP and the Social Democrats are not exactly best friends, which means that FPO is now in the position of playing a king-maker to the Government. That said, the coalition between OVP and FPO is still an uncertain: FPO leader Heinz-Christian Strache has accused Kurz and OVP of stealing his party's ideas during the election.

All in, almost 60 percent of Austrian voters opted to support anti-immigrant, Right-of-Centre positions. However, in recent years, Austrian Right has shifted away from anti-EU positioning, at least in public, and attempted to shed neo-Nazi tint to its support base.

Turnout in this election was impressive 79.3 percent, up on the 74.9 percent turnout last time around. 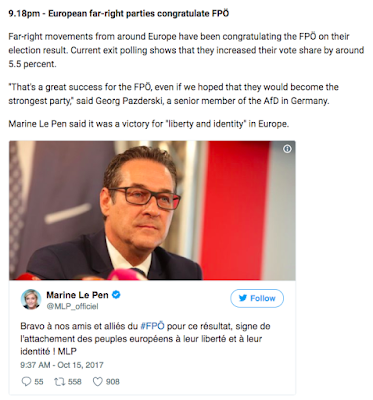 All in, Austrian election 2017 confirms the points established in our recent paper Corbet, Shaen and Gurdgiev, Constantin, Millennials’ Support for Liberal Democracy Is Failing: A Deep Uncertainty Perspective (August 7, 2017). Available for free at SSRN: https://ssrn.com/abstract=3033949. Together with Brexit, renewed uncertainty around Italian political shifts, Catalan Referendum, resilience of the Dutch euroscepticism, instability in core political strata in Germany, Polish and Hungarian populism, and so on - the developing trend across the EU is for a political / voter support drifting further to the extremes (Left and Right) of the ideological divide. In countries where this drift is coincident with rising power of populism, the results are starting to look more and more like validation of the far-Right (and with some time, the far-Left) as the leaders of the official opposition to the increasingly hollowed-out status quo parties.

Posted by TrueEconomics at 2:56 AM