30/9/17: Technological Revolution is Fizzling Out, as Ideas Get Harder to Find


Nicholas Bloom, Charles Jones, John Van Reenen, and Michael Webb’s latest paper has just landed in my mailbox and it is an interesting one. Titled “Are Ideas Getting Harder to Find?” (September 2017, NBER Working Paper No. w23782. http://www.nber.org/papers/w23782.pdf) the paper asks a hugely important question related to the supply side of the secular stagnation thesis that I have been writing about for some years now (see explainer here: http://trueeconomics.blogspot.com/2015/07/7615-secular-stagnation-double-threat.html and you can search my blog for key words “secular stagnation” to see a large number of papers and data points on the matter). Specifically, the new paper addresses the question of whether technological innovations are becoming more efficient - or put differently, if there is any evidence of productivity growth in innovation.

The reason this topic is important is two-fold. Firstly, as authors note: “In many growth models, economic growth arises from people creating ideas, and the long-run growth rate is the product of two terms: the effective number of researchers and their research productivity.” But, secondly, the issue is important because we have been talking in recent years about self-perpetuating virtuous cycles of innovation:


So what do the authors find?

Worse, there is a diminishing marginal returns in technology, just as there is the same for every industry or sector of the economy: “A good example is Moore's Law. The number of researchers required today to achieve the famous doubling every two years of the density of computer chips is more than 18 times larger than the number required in the early 1970s. Across a broad range of case studies at various levels of (dis)aggregation, we find that ideas — and in particular the exponential growth they imply — are getting harder and harder to find. Exponential growth results from the large increases in research effort that offset its declining productivity.”

We are on the extensive margin when it comes to knowledge creation and innovation, which - to put it differently - makes ‘innovation-based economies’ equivalent to ‘coal mining’ ones: to achieve the next unit of growth these economies require an ever increasing input of resources.

Computers are not the only sector where the authors find this bleak reality. “We consider detailed microeconomic evidence on idea production functions, focusing on places where we can get the best measures of both the output of ideas and the inputs used to produce them. In addition to Moore’s Law, our case studies include agricultural productivity (corn, soybeans, cotton, and wheat) and medical innovations. Research productivity for seed yields declines at about 5% per year. We find a similar rate of decline when studying the mortality improvements associated with cancer and heart disease.” And more: “We find substantial heterogeneity across firms, but research productivity is declining in more than 85% of our sample. Averaging across firms, research productivity declines at a rate of around 10% per year.”

This is really bad news. In recent years, we have seen declines in labor productivity and capital productivity, and TFP (the residual measuring technological productivity). Now, knowledge productivity is falling too. There is literally no input into production function one can think of that can be measured and is not showing a decline in productivity.

The ugly facts presented in the paper reach across the entire U.S. economy: “Perhaps research productivity is declining sharply within every particular case that we look at and yet not declining for the economy as a whole. While existing varieties run into diminishing returns, perhaps new varieties are always being invented to stave this off. We consider this possibility by taking it to the extreme. Suppose each variety has a productivity that cannot be improved at all, and instead aggregate growth proceeds entirely by inventing new varieties. To examine this case, we consider research productivity for the economy as a whole. We once again find that it is declining sharply: aggregate growth rates are relatively stable over time, while the number of researchers has risen enormously. In fact, this is simply another way of looking at the original point of Jones (1995), and for this reason, we present this application first to illustrate our methodology. We find that research productivity for the aggregate U.S. economy has declined by a factor of 41 since the 1930s, an average decrease of more than 5% per year.” 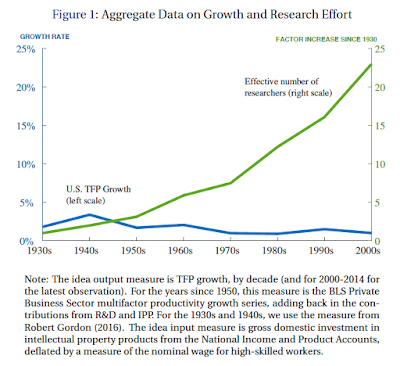 Update June 7, 2018: A new version of the paper is available at https://web.stanford.edu/~chadj/IdeaPF.pdf.

Posted by TrueEconomics at 5:58 PM