An interesting post about the Russian economy, quite neatly summarising both the top-line challenges faced and the resilience exhibited to-date via Pimco: https://blog.pimco.com/en/2017/09/Russia%20Growth%20Up%20Inflation%20Down. Worth a read.

My view: couple of points are over- and under-played somewhat.

Sanctions: these are a thorny issue in Moscow and are putting pressure on Russian banks operations and strategic plans worldwide. While they do take secondary seat after other considerations in public eye, Moscow insiders are quite discomforted by the effective shutting down of the large swathes of European markets (energy and finance), and North American markets (finance, technology and personal safe havens). On the latter, it is worth noting that a number of high profile Russian figures, including in pro-Kremlin media, have in recent years been forced to shut down shell companies previously operating in the U.S. and divest out of real estate assets. Sanctions are also geopolitical thorns in terms of limiting Moscow's ability to navigate the European policy space.

Banks: this issue is overplayed. Bailouts and shutting down of banks are imposing low cost on the Russian economy and are bearable, as long as inflationary pressures remain subdued. Moscow can recapitalise the banks it wants to recapitalise, so all and any banks that do end up going to the wall, e.g. B&N and Otkrytie - cited in the post - are going to the wall for a different reason. That reason is consolidation of the banking sector in the hands of state-owned TBTF banks that fits both the Central Bank agenda and the Kremlin agenda. The CBR has been on an active campaign to clear out medium- and medium-large banks out of the way both from macroprudential point of view (these institutions have been woefully undercapitalised and exposed to serious risks on assets side), and the financial system stability point of view (majority of these banks are parts of conglomerates with inter-linked and networked systems of loans, funds transfers etc).

Yurga, another bank that was stripped of its license in late July - is the case in point, it was part of a real estate and oil empire. B&N is another example: the bank was a part of the Safmar group with $34 billion worth of assets, from oil and coal to pension funds.

The CBR knowingly tightened the screws on these types of banks back in January:


I cannot imagine that analysts covering Russian markets did not understand back in January that these rules will spell the end of many so-called 'pocket' banks linked to oligarchs and their business empires.

The balance of the banking sector is feeling the pain, but this pain is largely contained within the sector. Investment in Russian economy, usually heavily dependent on the banks loans, has been sluggish for a number of years now, but the key catalyst to lifting investment will be VBR's monetary policy and not the state of the banking sector.

Here is a chart from Reuters summarising movements in interbank debt levels across the top 20 banks: 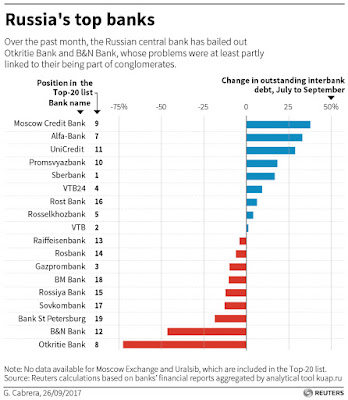 The chart suggests that net borrowing is rising amongst the top-tier banks, alongside deposits gains (noted by Pimco), so the core of the system is picking up strength off the weaker banks and is providing liquidity. Per NYU's v-lab data, both Sberbank and VTB saw declines in systemic risk exposures in August, compared to July. So overall, the banking system is a problem, but the problem is largely contained within the mid-tier banks and the CBR is likely to have enough fire power to sustain more banks going through a resolution.

Posted by TrueEconomics at 5:01 AM