22/5/17: Eurogroup and Greece: Wrestling Defeat from the Claws of Victory


The key sticking point so far is the scheduling of future primary surpluses (budgetary surplus before the debt servicing costs are factored in). The Eurogroup insists on these surpluses running at 3.5% of Greek GDP for the first 5 years following 2018, declining to 2% or 2.2% (depending on the version of the draft agreement) for 2023-2060.

In very simple terms, such commitments are absolutely bogus (and dangerous). They are bogus because there is absolutely no way anyone can project growth rates out to 2060 from today that can be in any way reasonably accurate to predict primary surpluses. They are dangerous, because they will shackle Greek governments to running buffer funds to compensate for possible recessionary and non-cyclical shocks to the primary surpluses. These buffers will imply underinvestment within the Greek economy (public investment) over the long term. Which, of course, will damage the Greek economy and increase the risk of non-compliance with the deficit rules.

Here is how unrealistic the current proposed targets are. Consider, first, IMF projections (April 2017 data) for primary surpluses over the next 5 years (2018-2022). Remember, Greek target (grey line) is 3.5% for that period: 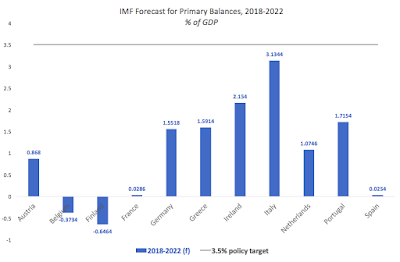 With exception of Italy, no other advanced euro area economy comes even close to the proposed target. And no one is making a case that Italy running these surpluses is somehow consistent with structurally strong growth expectations over the period. 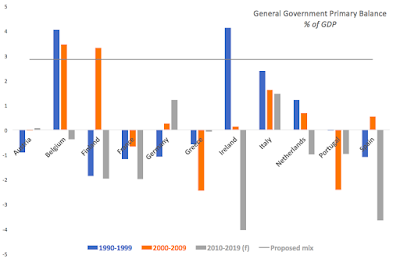 The view is a bit brighter.

In the 1990s, two countries managed to run surpluses at or above the target set for Greece forward: Belgium and Ireland. Both countries were recovering from substantial fiscal crises of the late 1980s-early 1990s.  But, unlike Greece today, both countries benefited from exogenous shocks that boosted significantly their surpluses and growth: Belgium gained substantial income transfers from growth of the EU institutions, and Ireland gained from a large scale FDI boom. Neither country needed to run large scale public investment programmes financed from own (internally-generated) funds.

In the 2000s, Belgium continued to run large surpluses and it was joined in this by Finland. Belgium surpluses drivers remained the same, while Finland carried out substantial fiscal consolidation in the wake of the early 1990s crisis timed perfectly to coincide with rapid economic growth in the economy.

In simple terms, no advanced euro area economy has managed to run surpluses expected of Greece at the times of adverse economic growth conditions or immediately after a major recession.

As I noted in the earlier post on the Greek economy (see http://trueeconomics.blogspot.com/2017/05/18717-greece-in-recession-again.html), the state of Greek economy has been so highly uncertain over the last few years, that any projections 3-4 years out from today are simply an example of a delirious wish-for-thinking. In this environment, setting targets out to 2060 is absurd, and dangerous, for it commits Greece to targets that may or may not be to the benefit of the Greek economy and sets up the euro area fiscal policy architecture for a failure at the altar of extreme conviction in technocratic targeting.

Posted by TrueEconomics at 2:37 AM