Having covered the latest news on the U.S. household debt continued explosion (see http://trueeconomics.blogspot.com/2017/05/19517-us-household-debt-things-are-much.html) and the ongoing deepening of the long term insolvency within the U.S. Social Security system (here: http://trueeconomics.blogspot.com/2017/05/19517-reminder-social-security-is-only.html), let’s take a look at the second largest source of household debt (after mortgages): Student Loans.

According to the data from the New York Federal Reserve, 1Q 2017 total volume of student loans outstanding in the U.S. was USD1.344 trillion, up on USD 1.310 trillion in 4Q 2016, marking the highest level of Student Loans debt in history. However, the Fed methodology does not include some of the more predatory types of loans extended to students.  This means that other sources report student debt at the end of 2016 to be between USD 1.44 trillion and USD 1.5 trillion (see for example https://studentloanhero.com/student-loan-debt-statistics/).

Setting aside the issues relating to data reporting, even by the official U.S. Fed standards, student loans debt is almost double the U.S. households’ credit cards debt, and is more than 10 percent higher than combined credit cards and HE revolving debt volumes.

Crucially, default rates on Student Loans are currently higher (at 11%) than for any other form of debt (credit cards defaults, second highest, are at around 7.45%). 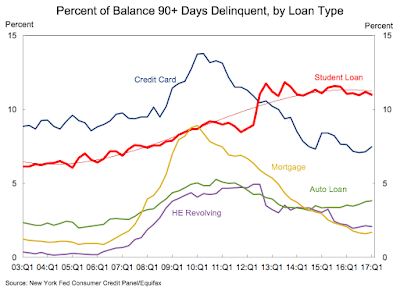 With an average debt load of over USD36,000 per student, the expected Fed rates hikes through 2017 alone are likely to take some USD 270.00 per annum from household budgets already under severe strain from low income growth, and sky high and rising rents.

Meanwhile, the U.S. bankruptcy code now excludes Student Loans from protection, courtesy of 2005 Congressional decision, presided over by Joe Biden. Of course, Biden’s political machine was supported by one of largest student loans underwriter, the MBNA. President Obama promised to undo Biden’s changes to the bankruptcy code, but in the end did absolutely nothing to keep his promise and, in fact, made matters worse (https://www.bloomberg.com/news/articles/2015-10-14/obama-administration-hits-back-at-student-debtors-seeking-relief).  Subsequently, during his Presidential election campaign, Donald Trump said “That's probably one of the only things the government shouldn't make money off -- I think it's terrible that one of the only profit centers we have is student loans.”  Since election, however, the Trump Administration is yet to do anything on the issue.

In simple terms, American students have no friends in high places… but legislators like Joe Biden can roam free across campuses and events extolling own ethical virtues… for a fee... often paid for by students' tuitions.

Posted by TrueEconomics at 4:04 AM