Quick run through the Manufacturing PMIs for January for BRIC economies:

Brazil's Manufacturing PMI slumped to 44.0 in January 2017, down from 45.2 in December, marking 24th consecutive month of sub-50 readings. Worse, rate of contraction in the sector fell to 46.3 in October 2016, prompting some analysts to declare a possible turnaround in Latin America's largest economy. This has now been fully erased, with month-after-month drops through January. January reading is so dire, it marks the lowest reading in seven months and the fourth lowest reading since April 2009 and ninth lowest on record. Three-month average through January sits at 45.1, which is worse than 46.0 3mo average previously and 45.6 3mo average reading through January 2016. In simple terms, economic contraction is accelerating in the case of Brazil, despite the fact that the country has been in a crisis since mid-2013.

Russian Manufacturing PMI continued to surge in January, rising from 53.7 in December 2016 to 54.7. This marks 6th consecutive above-50 reading and, more importantly, marks the highest rate of growth in 70 months (since March 2011). Another important marker, the index has posted increasing rates of growth every month since July 2016, and has now broke away from the resistance at 53.6-53.7. Index's 3mo average though January 2017 is at 54.0, marking a huge reversal of fortunes compared to 3mo average through January 2016 (49.5). All of this is consistent with rapid recovery from the 2014-2016 crisis and we can date the start of this recovery back to May-June 2016, based on Manufacturing data.

India's Manufacturing PMI regained 50.0 territory rising to statistically insignificant 50.4 in January 2017 from 49.6 in December 2016. 3mo average through January 2071 is at 50.8, which is slightly better than 50.2 3mo average a year ago. The rate of Manufacturing expansion is the second slowest in 13 months, implying that the recovery in the Indian economy is still very fragile. As I noted in 4Q analysis of BRIC PMIs last month, India is suffering from the economic crisis brought about by botched de-monetisation of its economy. This crisis appears to be easing, but is not over, yet.

China's Manufacturing PMI failed to gain faster momentum compared to December 2016 (51.9), falling back to 51.0 in January 2017. 51.0 is not a statistically significant reading for growth in China's case, although the index reading in January was still third highest since August 2014. Chinese Manufacturing PMIs have now been notionally (but not statistically) above 50.0 in five consecutive months. Current 3mo average is at 51.3, which is a sizeable improvement on 3mo average through January 2016 (49.5). Still, current PMI reading continues to signal substantial weakness in Chinese Manufacturing and is a reason to worry.

Charts below plot the trends in Manufacturing PMIs and tabulate more recent changes: 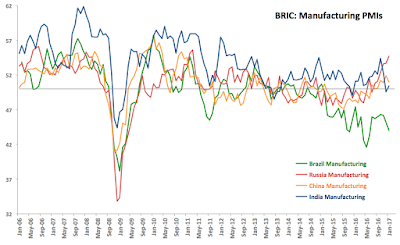 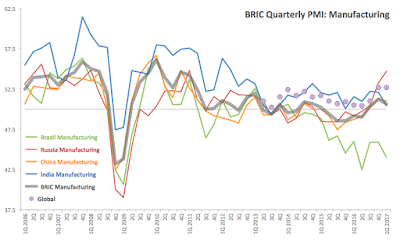 Overall, Russia continues to lead BRIC economies in Manufacturing PMI readings for the third month in a row. China comes in second after Russia for the second month in a row. India is effectively posting stagnant economic performance, while Brazil is showing accelerated rate of contraction.

Posted by TrueEconomics at 2:46 AM