Russian Services PMI came in with surprising upside that bucked the trend in Manufacturing (see links here: http://trueeconomics.blogspot.com/2016/03/2316-bric-manufacturing-pmi-february.html), posting 50.9 reading in February, up from 47.1 in January. On a 3mo basis, however, 3mo average through February remains below 50.0 expansion line at 48.6, which is actually poorer than 49.6 3mo average through November 2015, although much better than 43.7 3mo average through February 2015. In simple terms, February uptick in growth in Services is fragile, unconfirmed, and at this stage does not constitute a robust signal of economic stabilisation.

Per Markit: “Russian service providers reported a slight increase in their business activity levels during February, driven by an expansion in new orders. However, a rise in new projects could not prevent a further sharp deterioration in outstanding business in the sector. Meanwhile, job cuts were evident while price pressures continued to persist.” Still, “the latest increase ends a four month sequence of contraction. Panel members partly linked rising output to an increase in new export orders, the result of a depreciating rouble.” 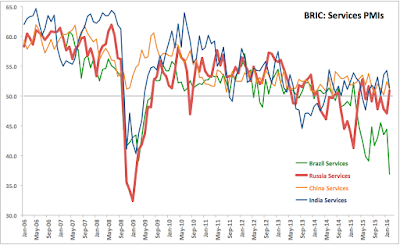 Net summary is: February reading for Services is encouraging, but is not yet consistent with sustained stabilisation in the economy.

This has been confirmed by the Russia’s Composite Output Index which also returned to expansion territory in February for the first time in three months. Per Markit: “however at 50.6, up from January’s 48.4, the latest upturn was relatively weak.” On a 3mo basis, the Composite index is still below 50 at 49.0, which is lower than Composite Index average for the 3 months through November 2015 (50.2) although strongly ahead of the abysmal reading for the 3mo period through February 2015 (46.2).

“A higher level of new business was reported by Russian service providers during February, the first increase in five months. However, the pace of
growth was relatively weak. Anecdotal evidence suggested that the expansion reflected the introduction of new products across the sector. Meanwhile, a slight rise in volumes of new orders were reported by manufacturers this month.”

Again, on the net, Composite PMI figures show the return to growth to be unconvincing at this stage. We will need at least 3 consecutive months of above 50 readings to make any serious judgement as to the reversal of recessionary dynamics in Russian economy.

Posted by TrueEconomics at 8:15 PM