Here is my summary as a reminder: The European Central Bank cut its key lending rate to zero (from 0.05 percent) in March, slashing its deposit rate further into negative territory (to -0.4 percent from -0.3 percent). Desperate for stimulating slack corporate investment, the ECB also significantly expanded the size and scope of its asset-buying program, hiking monthly purchases targets from EUR60 billion to EUR80 billion. Worse, Mario Draghi also expanded the scope of the programme to include investment grade, euro-denominated debt issued by non-financial corporations. And he announced yet another TLTRO – a longer-term lending programme (4 years duration this time around, having previously failed to deliver any meaningful uplift in the corporate capex via three 3-year long programmes). The new TLTRO will be operating on the basis of the ECB deposit rate, effectively implying that Frankfurt will be giving away free money to the banks as long as they write new loans using this cash. Last, but not least, the finish line for the ECB’s flagship QE programme was pushed out into March 2017 from September 2016. And yet, the ECB’s leatest blietzkrieg into the uncharted lands of monetarist innovation ended with exactly the same outrun as was the case for the Bank of Japan few weeks before it.

What is important however is not the above summary, but the estimated quantum of paper that the ECB so courageously planning to buy in order to prevent Euro area from sliding in a Japan-styled depression.

Enter BAML with their estimate: 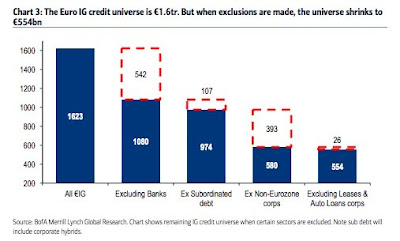 No, the lads ain't kidding. The Big Bang is at 100% of the market only EUR554 billion. Shaving off for some tightening of yields, stretching of spreads and eliminating holdings not available for sale, suppose ECB hoovers out 50% of the market. The latest 'stimulus' to the Euro area economy will be... EUR275 billion or so...

You can't make this up.

Or can you? Here's the problem, folks: Last time Bank of Japan’s policy rate was at or above 1% was in June 1995. Before the era of low rates on-set, Japanese economy managed to deliver average annual rate of real economic growth of around 3.6 percent. Since the onset of monetary easing, Japanese economic growth averaged less than 0.8 percent. Bad?.. Bad. But not as bad as in the glowing success of the Eurozone. Here, ECB policy rate fell below its pre-crisis historical low in March 2009 and continued on a downward trend from then on. This coincided with a swing in average real growth rates from 2.02 percent per annum to 0.05 percent. Yes, the numbers speak for themselves: since the start of the Global Financial Crisis, Euro area enjoyed average rates of economic growth that are 16 times lower than the same period average growth in Japan. No need to remind you which economy suffered from a devastating earthquake and a tsunami in 2011.

And to counter this, the ECB is deploying a measure that at most can deliver ca EUR275 billion.

Forget the idea of going after the bear with a buckshot load. Try going after a T-Rex with a paperclip...

Posted by TrueEconomics at 11:28 PM