On Services side, headline index reading in July was 63.4, which is marginally ahead of 63.3 registered in June. July reading was the highest in 109 months, after June posting the highest reading in 108 months.

Per Markit, "Panellists mainly linked the latest increase in activity to improving economic conditions." As I have shown in the past, the index is only now starting to re-couple with actual services activity indicators, suggesting that much of the PMI reading is biased by the specific, concentrated MNCs-led activity. Still, the PMI has now reached dizzying heights. 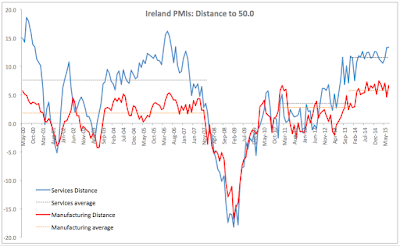 On another positive side, Services PMI boom is coinciding with Manufacturing PMI boom (also most likely driven by MNCs tax optimisation strategies): 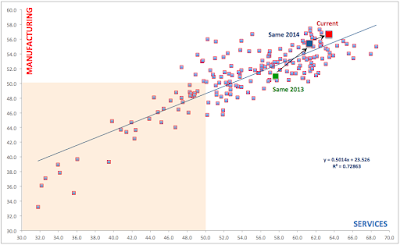 But, as the next post details, real actual, CSO-measured activity in the Services sector was nowhere near all-time highs in growth in 1H 2015. In simple terms, PMI is telling us porkies, or PMI survey participants are telling Markit porkies, or both...

What is even more disturbing is that Manufacturing PMI figures are also in the territory of imagineering, where fair princesses and unicorns run through the fields of golden pansies with butterflies at their... ah, whatever... just take a look at the above chart and read this: http://trueeconomics.blogspot.it/2015/08/5815-irish-industrial-production-up.html.

Posted by TrueEconomics at 9:24 PM