In previous posts, I have looked at:

To do so, we need two things:


We can compute all metrics in (1) based on actual CSO data. But we cannot know exactly our population size (CSO only provides estimates from 2011 through 2014 and no estimates for 2015). So I did a slightly cheeky approximation: I assumed that 2015 will see increase in Irish population of similar percentage as 2014. This is cheeky for two reasons: (1) population change can be slightly more or less than in 2014 due to natural reasons; and (2) emigration might be different in 2015 compared to 2014. Specifically, on the second matter, there has been some evidence of slower emigration out of Ireland and there have been some migrants coming into Ireland on foot of MNCs hiring.

Still, this is as good as things get, so here are the numbers, all referencing inflation-adjusted (real) variables: 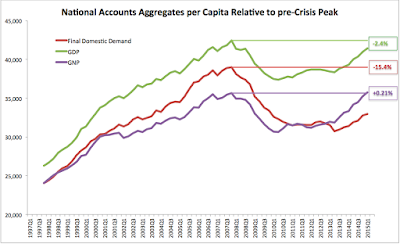 So in simple terms, by one metric of three, we are back at pre-crisis peak levels in per capita, inflation-adjusted terms. This metric is somewhat better than GDP per capita, but not perfect by any means and is getting worse, not better, in terms of measuring the real activity on the ground. Still, after 8 years, the recession cycle is complete in terms of GNP. It is still ongoing in terms of Domestic Demand.

Posted by TrueEconomics at 7:54 PM