I did not want to blog about Exchequer receipts and expenditure, primarily because the information that can be derived from two monthly returns is really not that significant. Q1 returns for March will be much more revealing of any emerging ‘trends’.

But then I came the across note from one of our stockbrokers - perhaps one of the poorest in quality I’ve seen in some time. Let me tackle the spin and errors that were presented as analysis.

“Tax revenues at end-February were €4.84bn, 2.2% higher than the same period in 2010 but €128 behind the government tax projections for this stage of the year.” So far – true.
“The shortfall was concentrated in value added tax receipts which were €120m behind expectations. This weakness raises concerns about the strength of consumer spending in 2011.” This ‘weakness' is 2 months in running – what concerns can be raised on the basis of such a short observation span and given seasonality and lags in payments – is open to doubt, but let's use the note own logic in my response.

“Income tax and corporation tax receipts were €45m and €23m behind but were partly offset by higher than expected excise duties.” Ok again – sticking to the numbers computed for them by the DofF seems to work for these folks.

“Overall tax revenue remains broadly on track to meet the government's targets”. Oh, really? Let’s recap the above: Income tax is 2.237% below target, Vat is 5.894% behind target, Corporate tax is 17.829% behind target. So 1st, 2nd and 4th largest tax heads are behind target appreciably. Tax receipts overall were 2.21% ahead of 2010, but 2.5765% behind the target. If that ‘broadly on target’ performance were to continue through the year, so we will be losing 2.56% off the target every 2 months, cumulative shortfall on target will be 14.5% for the year or a whooping 5,060.5 billion (I am, of course, using the very same logic that led this analyst to draw a conclusion about the VAT receipts above). Some ‘on track’ that is.

And then arrives tour de force - the breakdown of someone's copying abilities:
“Tax measures introduced in Budget 2011 including the new universal social charge had an impact for the first time on the February receipts. Income tax receipts were 25% higher than in the corresponding month of 2010, albeit slightly behind the expected target for this stage of the year.”
Here comes a sticky: income tax receipts were 1,835mln through February 2010, they were 1,967mln through February 2011 – which makes them 7.2175% above yoy not 25%. The most bizarre thing is that the DofF note provides correct (7.2%) figure.

The mystery of 25% was explained to me by the analyst overnight. It was NET February income tax receipt that rose 25% yoy, not the cumulative tax receipts reported by the DofF. Net February 2011 receipts were €980mln as opposed to €784mln in February 2010. Of course, the note did not mention that this 'achievement' was due to the inclusion of the Universal Social Charge into the February 2011 figures. Here is how the DofF itself described the situation:
"PAYE receipts in the month of February amounted to €676 million, some €38 million or 6% up year-on-year. While PAYE receipts in February show the impact of the income tax measures introduced in Budget 2011, they do not include receipts from the USC and therefore allow for a comparable year-on-year analysis to be made."

What's missing in the above is the fact (stated elsewhere by the DofF, but again omitted by the analyst) that 2011 Income Tax Receipts include Health Levy that previously was not counted in the income tax. Here is from the Exchequer note for January 2011:
"The forecast growth rate in tax revenues for the year as a whole is 9.9%. This is driven by two significant factors: (i) The reclassification of health levy receipts, which heretofore had been collected as a Departmental receipt paid directly to the Department of Health & Children, to form part of the new Universal Social Charge, to be collected as part of income tax, and (ii) The large Budget day tax raising package, primarily on income tax, of €1.1 billion."

So 25% figure, while not in itself a bogus one, does not support any sort of a conclusion to be drawn about year on year comparatives, unless we net out health levy equivalent receipts.

However, the conclusion that can and should be drawn (downplayed by the DofF) is that PAYE receipts are growing at 6% and that after a significant shrinking of the tax bands.

Let's, however, recall that January returns did not reflect USC inclusion as the returns related to December 2010 incomes. Correcting for this - take DofF forecast for total income tax measures of €1,100mln in 2011 and take out the share of January-February from these, adding them to the 2-months receipts attained and then extrapolating into the rest of the year. Cumulative income tax shortfall on the target then is 6.22% for the full year 2011 or €879mln. Not good.

So
Of course, the latter can be billed as some sort of a net positive for the Exchequer...

Here is the table of calculations: 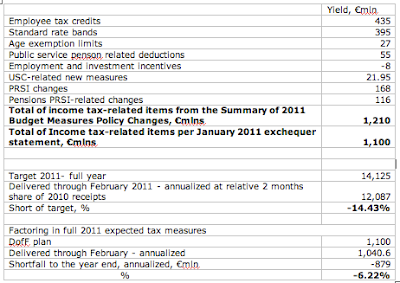 Posted by TrueEconomics at 11:55 PM