We often think of Ireland as low tax economy. We also think of ourselves as inhabiting flexible labour markets and enterprising world of work-hungry people.

Here is an interesting angle from which we can look at the labour markets. Suppose the cost of labour for an hour of work goes up 1% - due to an earnings increase or benefits rise. What does a worker get to keep out of this?

Ex-ante, we would expect Ireland to see significantly higher returns to workers efforts from rising earnings and/or social security (PRSI) contributions by employers (reduced burden on employees and higher expected future benefits of PRSI funding). This, however, is not true.

Here are few charts from the latest OECD data set - for 2009, so not reflective of the Budget 2010 changes in taxes.

OECD defines the main parameter under consideration as: "Net income is calculated as gross earnings minus personal income tax and employees' social security contributions family benefits. The increase reported [in charts below] represents a form of elasticity. In a proportional tax system the plus elasticity would equal 1. The more progressive the system at these income levels, the lower is the elasticity."

Now, as you look at these charts, remember, the Irish Times crowd love droning on about the lack of 'progressive' tax system in Ireland. 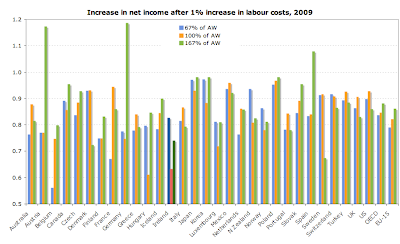 Clearly, single people in Ireland have little incentives to supply more labour in response to an increase in their earnings. Alternatively, we do have a severely progressive system of taxation for labour when it comes to single individuals. Actually, for a single person earning 100% of average wage, Ireland is second to Hungary in the OECD in terms of progressivity of our labour income taxes. That's right - we have second lowest incentives to supply more labour (or in other words, we keep second lowest amount of added cost of labour in our pockets) in the entire OECD. For a higher earners (167% of AW) the picture is not much better - we are actually fourth from the bottom of the OECD league (or 4th highest degree of progressivity).

Now on to families with 2 kids: 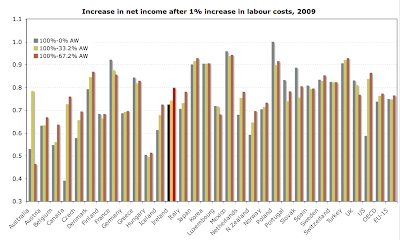 Here, we have a slightly improved picture. For a family with 1 earner bringing in 100% of AW, we are ranked 16th in the OECD in terms of incentives to provide more work in return for increased earnings or contributions. For a family with one earner on 100% AW and another on 67% of AW, the same rank is 14th. Progressivity of our labour taxes in all 3 scenarios in the chart above is still above the average for the OECD.

Now on to comparing single person with no children and a family with 2 children: 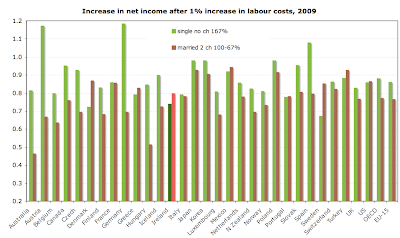 Doesn't look like there's a great deal of premium to being married in Ireland, does it? Nope. If labour costs go up by 1 Euro, a single person on 167% of AW would keep 74 cents, a family with 2 kids with exactly same combined income will keep 80 cents. Both are worse off in Ireland than their counterparts in 27 countries (single person with no children) and 13 countries (married couple with two earners and 2 kids). Again, much of Irish Times-loved progressivity in either household income taxes.

What if we take lower earning individuals for the above comparison? 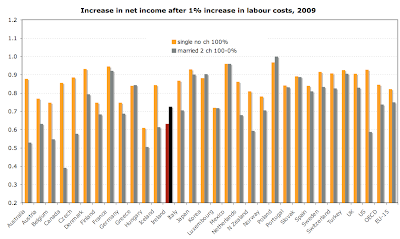 But does having children actually help or penalises working households? Take a look below: 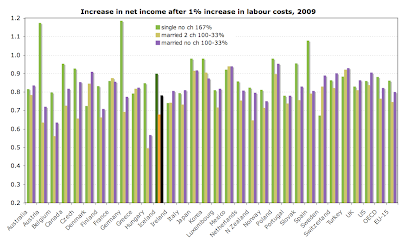 So working households with both parents working and 2 kids are allowed by our tax system to keep less of their higher income than their childless counterparts and single childless earners. That's really does begin to look like a perverse system of income tax 'justice'.

Let me summarise the data in a handy table:

By all metrics and for all categories, Ireland simply qualifies as a country where
Not exactly a flexible market with great incentives to work, is it?

Posted by TrueEconomics at 8:36 PM

no one wants to do overtime in our workplace due to the extra tax that would be levied..