Starting from the top, the same picture as in August remains true - capital spending cuts drive overall performance on expenditure side, while current spending cuts are extremely shallow: 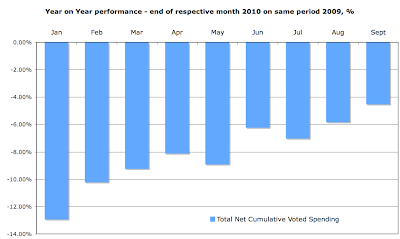 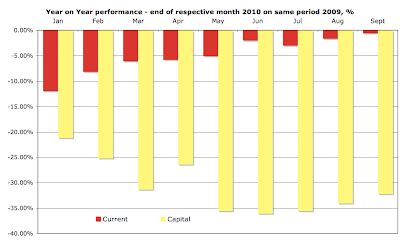 Notice also that both cuts are getting shallower as the year progresses. In months ahead, delayed payments to contractors will have to be settled, implying that it is likely that current spending is going to break the contraction cycle by the year end, while capital side savings are going to get shallower. It is, therefore, highly unlikely that overall year on year performance in terms of Exchequer spending will post a decline greater than 2% of overall spending in the end. 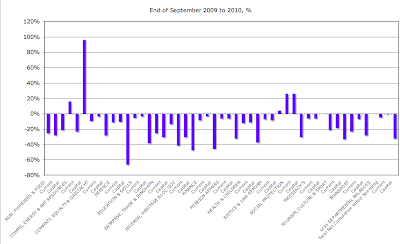 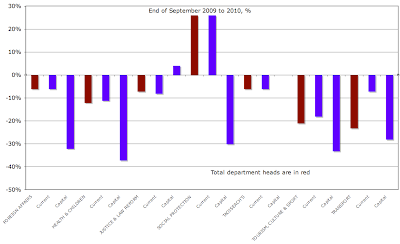 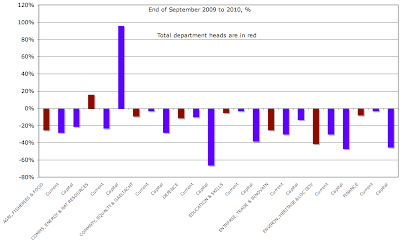 So where's the money being spent? 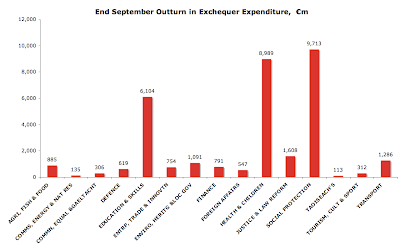 And how does it compare to the DofF targets? 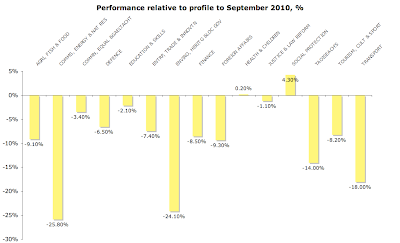 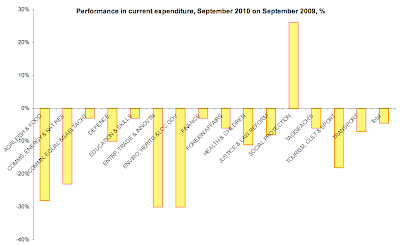 So for all the hoopla about draconian cuts and great courage of our public sector (remember, the Croke Park agreement claimed that €3 billion has been cut out of public sector wages alone), we have saved (January-September 2010) a miserly €1,562 million. Oh, about 5 weeks worth of our state borrowing so far or 3 weeks of our borrowing year to date. But even that number conceals the truth. Year on year, just €156mln - miserly number indeed - was cut out of current expenditure. That's right, folks, for the state that borrowed €16 billion this year so far, we managed to save less than 1/2 a week worth of what we issued in fresh bonds since January 1.

Put this into Croke Numbers perspective, at the rate things go, it will take 19.2 years for us to reach the magic 3 billion in savings number cited by the Bearded Ones.
Posted by TrueEconomics at 7:43 PM

All public servants should be put on minimum wage, and if they dont like it, they can quit.. We can then see if we notice any difference. Im sure it would be a shock for them to get a job in the private sector and do some work for once.