Lastly, it's time to put the sums together.

Despite the heroic efforts of the Government and the Public Sector Unions, Exchequer deficit continues to trace out the exactly same path as 2008. And this is ex-banks: 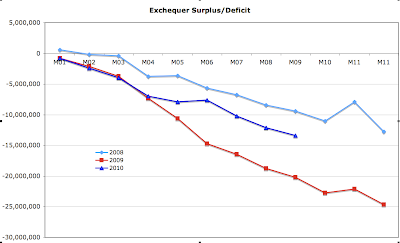 As I pointed out in the previous post, we are 'saving' €1,562 million January 2010-September 2010 of which €1,406 million came from the capital budget cuts (the so-called investment (dis-)stimulus that Brian & Brian have promised to deliver in Budget 2009, then Budget 2010 and in all of their 'growth strategies' since the beginning of the crisis). Only miserly €156 million of savings came out of the public sector current spending, less than 1/10 of the total cuts.

More worrying is the fact that much of the capital cuts came in at the beginning of the year, and since July, these cuts are getting smaller and smaller as a share of overall capital budget allocation. Meanwhile, current spending cuts are becoming virtually invisible with time as well.

In June this year, capital budget was down 36% yoy. Today this decline stands at 32.1%. In January, we posted an impressive 11.9% cut, yoy, in current spending. This has steadily declined to 1.6% by August 2010 and finally to 0.5% in September 2010. Let's take a look at the latter number: current spending by the Government €30,088 mln through September, which is 1/2 of 1 percent lower than it was in the first 9 months of the disastrous 2009! Does anyone still wonder why the capital markets don't buy the story that Irish Government is capable of controlling its spending habits?

Let's cut to the chase. Despite all the rosy, warmly glowing reports about "yet another month of improved fiscal performance" it looks like we are turning yet another corner - the corner of rapidly evaporating savings. Next intersection: Disaster Avenue?
Posted by TrueEconomics at 8:56 PM

Ah, but you are not considering the 1.5 bn that we will not be putting into the NPRF this year. That makes it 3 bn saved. Simples!

Have you noticed that when capital spend is large, the government don't include it in their figures, no matter what it is, but when it is reduced, the savings somehow magically count?