Economics 25/9/10: Accounting for our exports

Quarterly national Accounts offer a rich set of data. Listening to all the talk about turnarounds and Government policies, I wondered -
So a natural question from my point of view was: "Absent net exports, how badly was our economy hit by the Great Recession?" 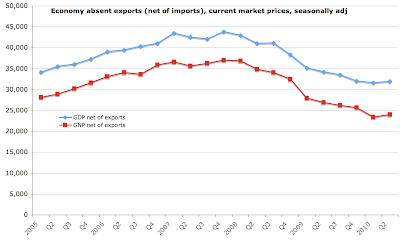 And same in terms of year on year growth rates: 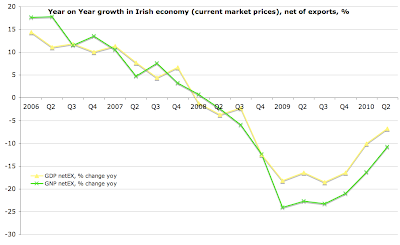 Now, let's put together our growth rates for GDP and GNP ex-net Exports and standard GDP and GNP growth rates (gross of net exports, expressed as before in current market prices, with seasonal adjustments): 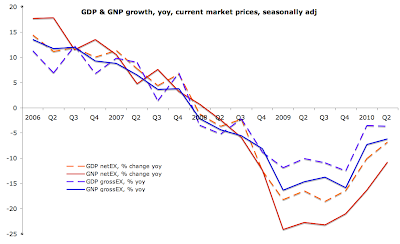 To me, this paints a pretty clear picture. Given that the Government has provided virtually no supports for our exporters, the gap between each solid line and each dashed line shows the true extent of net exports contribution to growth in GDP and GNP. And this gap also shows that the economy more directly controlled by the Government has been tanking at a much steeper rate than the economy which includes our exporting firms.

Let's put a cumulative figure to this same picture:

So in those parts of Irish economy where our Leaders had a say (red) we have suffered a decline in domestic income of cumulative 34.35% since 2007. In economy which includes the part which our Leaders have very little control over, the decline was 23.7%. One wonders if there is any truth whatsoever to the leadership claims on economic policy front we've been hearing in recent days?..
Posted by TrueEconomics at 10:24 AM

One wonders....? It's blatantly obvious that spin/slant/outright lies have been used to keep FF and their cronies in "power"... Why they want the jobn is simply beyond me...

"...this gap also shows that the economy more directly controlled by the Government has been tanking at a much steeper rate than..."

Quelle surprise! I thought it had been well demonstrated back in the 50's that a genuine free market economy did MUCH better than economies directed by central state authorities. Yet, they still insist in trying to direct it. I might add that it has seemed in the case of their precious FIRE economy that they were not even trying to direct it towards the good of the people in general, but rather towards the good of a certain section of people who embraced a particular FF tainted world view...

Anyway, someone remind our incumbents that such views as those represented by the esteemed Tipperary man John D. Bernal concerning state directed science and technology were entirely discredited 50 years ago. But they still seem to be singing from that old hymn sheet!

Hello Con
Excellent as usual.
This nation will have a general election within 12 months.
We have a Government in place who are avoiding the truth which makes it impossible to identify solutions.
The opposition are no different.
We have to get the simple truth outlining the current economic situation into the populations mind so that good decisions can be made.
Irish politicians are not fit for the purpose of running Ireland.It's in their interest to confuse the population.
Walter Power.

Trying to disaggregate an export economy from an import economy this simply (taking one number out of another)
is just wrong, and a little disingenuous
e.g scenario where expenditures PA are as follows
factories and infra (for export related goods) 100m (say this investment has a 10% return pa, this infra invest wont show up in the exports column)
internal services 100m

along comes a down turn, exports fall by 10%, no desire to increase export capacity further.

and exports have fallen by 10% ,
but domestic economy has dropped by 50%....
and by your logic blame the internal policy...

Other than that I enjoy the blog (and im not saying the conclusion is wrong....)