Time to take a closer look at the latest data from Quarterly National Household Survey - released a week ago. The focus below is on less recognized trends, so endure the charts... 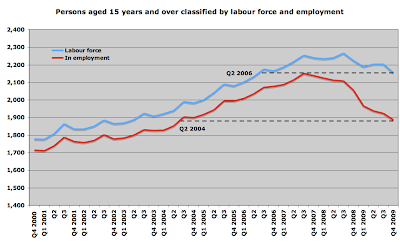 Chart above shows the dramatic declines in our labour force and an even more dramatic decline of those in the labour force who are currently employed. In effect, unemployment has consumed two years worth of gains in jobs, plus another 3.5 years worth of increases in participation. Overall, we are now back in Q2 2004 when it comes to employment figures.

As a result, unemployment soared, but what we tend to forget in looking at the headline figure is that long term unemployment - lagging ordinary unemployment by some 12 months or more - is now precipitously rising... 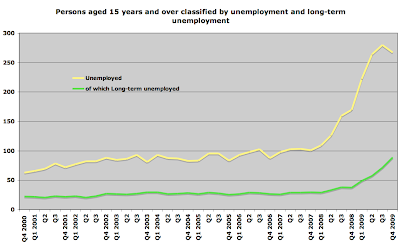 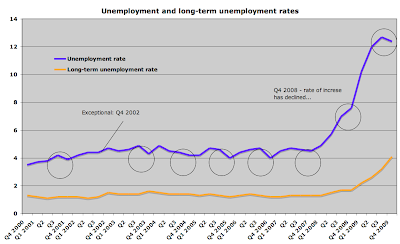 Chart above shows that contrary to all the talk about 'bottoming out', the latest fall-off in unemployment recorded in Q4 2009 is seasonally consistent with normal patterns, implying that in all likelihood, unemployment figures will remain on the rise from Q1 2010 on. 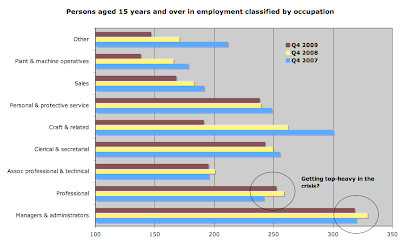 Looking at employment changes broken down by occupation, it is clear that the crisis has seen most of jobs destruction focused at the bottom of earnings distribution - in areas that are less skills-intensive. There are, most likely, several reasons for this:
Overall, however, it is worth noting that occupations with greater human capital intensity of production are holding up much much better than those where people are closer substitutes for technology and machinery. 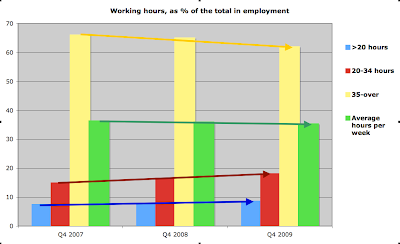 We clearly are having a secondary crisis in terms of under-employment, whereby workers might be retaining jobs, but their hours worked are being cut back dramatically. Percentage of full time jobs has clearly declined, while part-time jobs are on the rise.

And unemployment is becoming a long-term condition for an increasing number of workers: 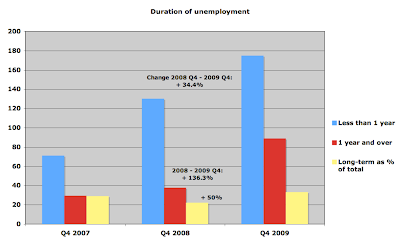 The numbers are pretty self-explanatory, except that one must add to these figures an observation - long-term unemployed are much harder to shift off the welfare than those in shorter term unemployment. Note that 29,400 long-term unemployed back in 2007 were pretty much unchanged since the beginning of the century. Since then, however, we just added 59,700 more of those who are risking to becoming permanently unemployed into the future. 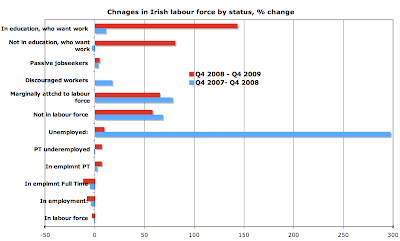 While unemployment increases (chart above) were the feature of 2008 labour market collapse, job seekers (both in education and outside), underemployment rises and full-time employment fall-off were the main features of of 2009. These are likely to remain dominant in 2010 as well as unemployment reaches deeper into skills distribution over time.

This is confirmed in the following chart: 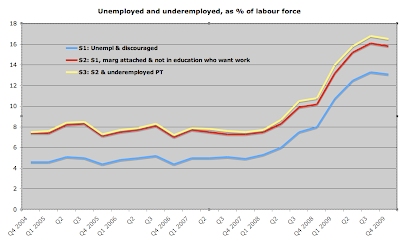 Notice that S3 and S2 (broader) categories of stressed workers are rising faster through out 2009 than the more narrow unemployed category. Should the positive move in Q4 figures be reversed (see above discussion), there is significant likelihood that these broader categories will continue to increase at a faster pace than simple unemployment measure, further increasing surplus capacity in the economy and putting more income uncertainty onto the shoulders of those still in full-time work. 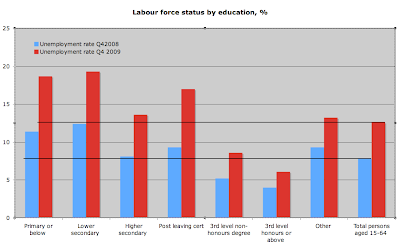 Returning back to the issue of skills: chart above shows that both in 2008 and 2009 workers with greater human capital attainment were in lower risk of unemployment than those with lower educational attainment. Of course, this is a result of several forces:
All of this, however, suggests that human capital matters even in amidst a wholesale collapse of the labour market experienced in Ireland. 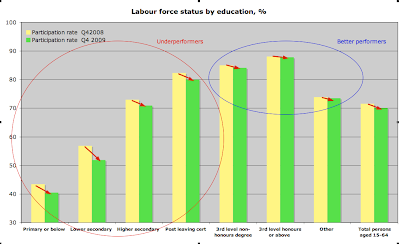 And, as chart above shows, workers with higher human capital attainment are also more likely to be fully engaged in the labour force. Which means two things:
In short, we are now at risk of creating a permanent underclass of under-skilled and under-employed.

And to conclude - two charts on comparisons between Ireland and the rest of EU27: 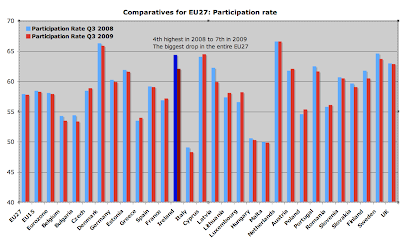 Participation figures above clearly show that our labour force has experienced a much more dramatic collapse than in any other country in the European Union. At the same time, our unemployment has risen less drmatically: 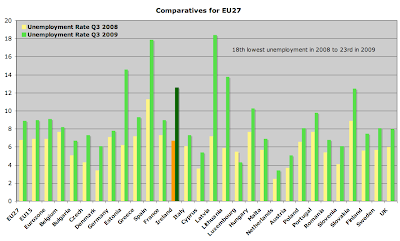 Which suggests that the gap between us and the worst performing European countries (Spain and the Baltics) masks a much more troubling reality: Irish unemployed are much more likely to drop out of the labour force (and thus out of unemployment counts) than those in other European countries.

This, of course, is a sign of much deeper despair.
Posted by TrueEconomics at 7:51 PM

Great analysis as usual constantin. But the moving out of the job market in ireland is due to FAS courses and also generous family income supplement which for couples on low incomes means the benefit of collecting the dole is negligable

Interesting stuff. A few further charts tracking the composition of the labour force by nationality can be seen here.