Contagion from Greece is clearly a problem for the EU at this stage. Looking back into some older data, February 2010 note from Credit Suisse (linked here) 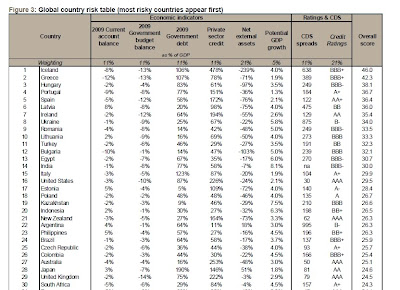 Spot Ireland at position number 7? That was then. The figures refer to 2009, which means that since then, pressures on Iceland, Hungary and Latvia have receded. In addition:
So re-weighting the score in the right hand column of the table, Ireland gets closer to 38.1-38.3, Portugal moves to 39.4-39.5, Greece to 45. We are number 3 on the list...


PS: If you want to see an example of absolutely and even alarmingly distorted logic - read this. One of the best examples of bizarre ramblings that pass for 'analysis' in Ireland. I mean what else can you call a note that:
I mean this stuff is actually factually incorrect and logically inconsistent!
Posted by TrueEconomics at 4:49 PM

Thank you for engaging with debate, even if there a small inconveience to me from trying to participate in the same debate now in 3 different fora.

You assert that my analysis is both factually incorrect and logically inconsistent.

However, of the 7 points you make, the first 4 you note 'admissions' of mine. So, implicitly, we are agreed on these facts, whether they were admitted or simply stated by me.

To deal with the next 2 points of criticism. My contention that Greece was initally facing a milder recession than the EU average is derided. Yet there is a link to 4 charts from Reuters in the post which includes the Greek and EU GDP and PMI data, showing precisely that.

The subsequent double-dip in the Greek economy is entirely a function of the fiscal contraction policy that as been adopted, as the Bank of Greece has noted.

Similarly, the point is questioned that virtually all the EU member states who now enjoy much lower deficits and bond yields than Ireland adopted fiscal stimulus. I would have thought anyone acquainted with economics would be aware of that, especially the 'true' variety.

Here is one official estimate of the average fiscal measures in the Euro Area and EU as a whole for 2009. EU Commission, European Economic Forecast, Autumn 2009, http://ec.europa.eu/economy_finance/publications/publication16055_en.pdf

Since it was published in Autumn 2009 there were in fact further large increases in the stimulus measures in both France and Germany.

In my original post, the average deficit profile of the Euro Area is shown, where the deficit initally rises for one year and has now begun to stabilise. These are EU Cssn. data. Ireland's increasing deficit profile was also shown.

Therefore, my argument remains that the EU fiscal stimulus has worked and Ireland's slash&burn hasn't. It is an argument that is open to challenge. But it is based on facts, referenced in the post. I think criticism of any argument should also be evidence-based.

After reading that comment, all I can say is that Europe is f*%ked if this actually passes for serious analysis these days....thank god I left the country a few years back...

I would make a serious response, but the argument presented in this comment is not worthy IMHO.