Enough of Nama, for now. Data from CSO is coming thick.

Initial estimates for the second quarter of 2009 show year on year declines in both GDP (-7.4%) and GNP (-11.6%), with the gap between GDP and GNP widening. Compared with the corresponding quarter of 2008, GDP at constant. Quarter-on-quarter, GDP remained constant in Q2 2009, while GNP slid 0.5%. It is worth recalling that GDP-wise Q1 and Q2 2008 were already negative growth territory, so current ‘stabilization’ comes on top substantial declines taken in 2008.

Predictable sources of declines: consumer spending (down 6.8% yoy), capital investment (down 24.4% in Q2 2009 yoy), net exports are up yoy boosted by MNCs (goods manufacturing) and by collapse in imports. Industry output down 11.3% yoy and within construction sector – 30.8%. Every sector is posting fall-offs.

Incidentally, do tell me there is demand for credit out there that urgent we have to break the back of the entire country to repair it. I can't see one - capital investment tanked, so companies are not in a mood to invest in future capacity (see stocks changes, too), while personal consumption is bouncing at the bottom, every time a little lower. Oh, I get it, if only the banks were issuing new loans, we all can go out, borrow some more dosh to pay for... hmm... Brian Cowen's excesses in spending? But back into non-Nama land: 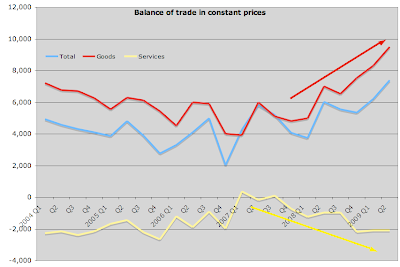 Table below compares trade performance relative to corresponding quarters of 2007: 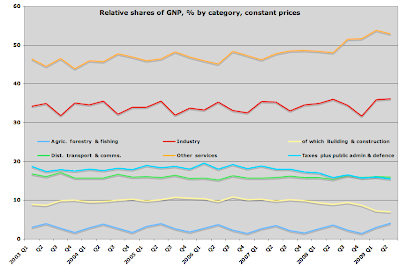 The above chart shows that taxes, public administration and defence contributions to GNP are falling over time – since Q1 2007 and despite April Budget and October 2008 budget, this fall continues today. This is not to be confused with the falling cost of Government in terms of taxation-exerted drag on growth. The decline in Government share of GNP is reflective of two things:
(1) there has been a marked decline in capital investment (i.e we still waste piles of cash on non-investment activities);
(2) the rising interest rate bill on Government debt is now adversely impacting GNP. 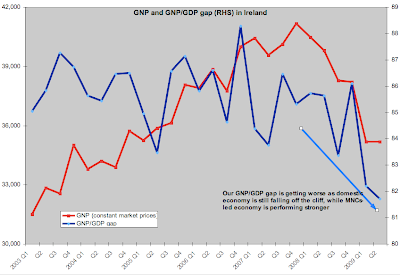 Now, recall those evil Americans who, according to our Taoiseach and his Cabinet members, gave Ireland this recession... Chart below illustrates: 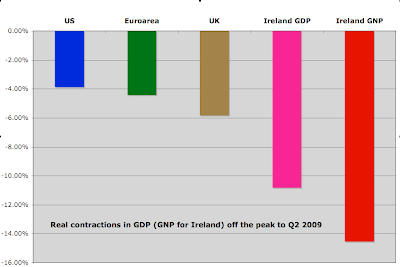 Yeps, they (Americans) sneezed, Europe got a slight fever, the UK is out with a major flu and Ireland is... well... Ireland is busy dumping tens of billions in cash it does not have on public sector wages, social welfare payoffs and, next best thing to Partnerships - Nama...
Posted by TrueEconomics at 9:11 PM